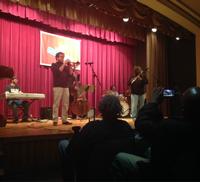 On Monday, March 28, join the Free Library of Philadelphia and the Philadelphia Jazz Project for our latest installment of the Mysterious Travelers 2 Jazz Series. We music librarians see the popular concert set—specifically, exhibition—as the logical endpoint of hours spent at the people’s university poring over songbooks, single pieces of sheet music, chamber music, fakebooks, and books about music.

This is the third month of synthesis with the theme Great Migrations, for which each artist will handle the theme of the mighty journey of African Americans to Philadelphia and other northern cities from the South, to which we owe our rich urban musical heritage.

To reserve your spot at this concert, you can get FREE tickets through Free Library of Philadelphia's Music Department.

To see the lineup for the entire series, past and future, take a look at our program guide.

To hear recordings, both live originals from Montgomery Auditorium or previously released recordings from our streaming music services of established jazz classics that some of these musicians are re-imagining, check out our blog.

Up Next: Najwa Parkins

This month’s concert is led by Najwa Parkins. Parkins is a highly sought-after trombonist, vocalist, educator, composer, lyricist, dancer, actress, and performing artist. She leads her own quartet, Najwa Parkins and the After Hours Trio, and is also a member of the Emmy-nominated Alex and The Kaleidoscope Band, as well as working with Phil Woods and the Festival Orchestra, Hot Bijouxx, Bachelor Boys Band, and on her own solo projects. She has shared the stage with artists from Benny Golson to Branford Marsalis. In 2011 she released her debut album, Not the Next Someone Else, and 2015 will see the release of the eagerly awaited Najwa Parkins Live at the Deer Head Inn.

February’s Mysterious Traveler’s concert with Wali Bickley nearly failed to launch. The night of the show, minutes before the doors opened, there was a sudden technical issue. Jazz-hungry patrons flooded into the lobby, but with the band busy fixing the sound, the auditorium doors had to stay shut. Folks started sitting on steps and the Jazz Project's chairs, snaking around the lobby in a long line. Ten minutes to showtime, the problem was resolved, and people rushed in and took seats. Once the PJP introduced William “Brother Wali” Bickley, the band launched into music.

The band played several tunes from Wali’s play The Puppet (which he’ll be performing in Manayunk on July 8). The first number started with a snaking, staccato double bass, which would serve almost as a theme, returning through each of several songs from the play. Another song-to-song carryover was the classic roundtable jazz solo. Trumpet, keys, bass, flute, and drums would all take a few bars in each song to improvise.

Franklin Neblett, the drummer—a high school senior—was a highlight for the crowd; his solos reminded you of building a model train set: when it was his turn, he would often slow the beat down, pulling the curtain back on the structure, the bones, the foundation of the groove. He’d build on it so much—as he added two double-bass hits here, a bare-hand snare thump there—that you’d ask, What’s he building? But then he’d return to normal tempo and you'd see that all the parts fit back into perfect relief.

Once the concert ended, audience members flocked to Wali and demanded he tell them where they could see him again. You can watch a video of the performance below: