On Wednesday, May 18, stunning percussion collective TIMBALONA showcases Afro-Caribbean folkloric music in the second installment of the New Americans Spring Concert Series, a soundtrack-in-triplet of three distinct voices in our city's music collection. We’d love it if you could make it to this or all concerts in this great program. Please tell your communities about this event, reserve your free tickets here, and we hope to see you there!

Recapping: Arab Classical and Contemporary Music
The first installment of the New Americans Spring Concert Series kicked off on April 18 with a program co-presented by Al-Bustan Seeds of Culture. Leading up to the concert, people told us how excited they were to see the two master musicians, Hana Khoury and Hafez Kotain of the Al-Bustan Seeds Takht Ensemble, play for free. Hana and Hafez are both winners of prestigious Pew Fellowship awards.

Al-Bustan Seeds’ Director of Programming Nora Elmarzouky introduced the duo and gave a message of standing together in the face of outside forces making attempts of othering. Librarians echoed this message of solidarity and ran to get more chairs as the seats easily filled up.

From the start, Hana and Hafez made their performance interactive: People repeated inflections and Hafez had folks clap in interplay with his doumbek beats. While Hana was demonstrating how the Arabic maqam music scale was organized, he asked the audience to sway their palms and sing in rhythm to his violin. If you’ve never been in the Parkway Central’s Grand Lobby before, the effect of the sound rising up and pluming against the high coffered ceiling was impressive.

You can view videos of the performance on the Music Department’s Facebook page:

If you’re hungry for more Arab music or books about Arab musicians, you can find where they live at the Free Library easily by searching the catalog using Subjects— one of the many fruits of librarians harnessing information-literacy finesse to make it easier for you to discover the world’s knowledge. Try searching Songs—Arabic and Music—Arabic.

If you’re interested in some of the Free Library’s Electronic Resources, which really shine when exploring music of the Arab world, librarians recommend Contemporary World Music, a premium streaming subscription database. After you log in with your library card and PIN, you can use its Place browser like a globe trotter. Try exploring music from different Arabic countries:

We hope you’ll catch the second edition of the New Americans Spring Concert Series with TIMBALONA next Wednesday in the Grand Lobby of Parkway Central Library! 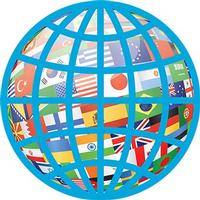 The New Americans Committee.
Hannah and Hafez of the Al-Bustan Seeds Takht Ensemble kicked off the series
TIMBALONA brings Afro-Craibbean folkloric music to the May concert
Add a Comment