The Unreliable Narrator: Who Can You Trust?

Sometimes you just can't believe the story someone is telling you. Maybe it’s because it seems too fantastical or maybe it’s just because the storyteller is untrustworthy. Maybe they were robbed or maybe they broke into a bathroom—sometimes you just don't know till you get to the end of the story. In literature this is known as The Unreliable Narrator—a character you think you can believe and who has you captivated by their story until BOOM... plot twist!

Much has been made of the unreliable narrator in adult literature—think Humbert Humbert in Lolita (blarg, gross), Patrick Bateman in American Psycho (worst date ever) and EVERYONE in Gone Girl (seriously guys, therapy). Less well known are the Young Adult counterparts—fascinating young storytellers with credibility issues. Is it mental illness, repressed memories, OR are they just saving the best for last? The past few years have produced some remarkable and twisted stories you must see through to the end.

In Made You Up by Francesca Zappia, Alex fights her schizophrenia to separate what's real from what's not, determined to stay sane long enough to get into college. She's pretty optimistic about her chances until she runs into Miles. Didn't she imagine him? Before she knows it, Alex is making friends, going to parties, falling in love, and experiencing all the usual rites of passage for teenagers. But Alex is used to being crazy. She's not prepared for normal. Can she trust herself? Can we trust her? What is even happening—argghhhhh!!!!???? Trust me, you'll love it. (Or will you?)

Seventeen-year-old Candace is struggling with headaches, amnesia, and boredom in E. Lockhart's We Were Liars. Why won't her cousins respond to her emails? Why can't she seem to focus on her school work? Why didn't she vacation on the family's private island last summer? This story of privilege and dysfunction is so nicely plotted and paced that when the truth comes out it feels both inevitable and like a punch in the stomach. In the good way, of course.

Don't let the cover image or the Newbery Honor Medal fool you—The Thief by Megan Whalen Turner will blow your mind. Gen is a thief with unusual and remarkable skill who has been hired to steal the unstealable. This first book in The Queen's Thief series has everything—chases, drama, stealing from temples, ghosts, backstabbing—just everything. I read A LOT of books and I feel like I can usually see the twist coming but I'll tell you what—I DID NOT SEE THE TWIST COMING! This book might be for the younger end of the Young Adult audience (there's no sex, drugs, or rock 'n' roll) but don't let that fool you into thinking that this isn't brilliantly written and terribly exciting.

Did I miss anyone amazing? Let me know your favorites in the comments!

Made You Up by Francesca Zappia
We Were Liars by E. Lockhart 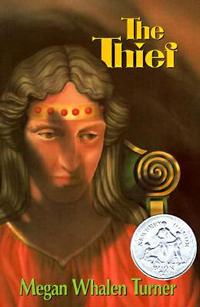 The Thief by Megan Whalen Turner
2 Comments | Add a Comment
Great article! How about Liar by Justine Larbalestier? Tells you what you're getting right in the title!
Kim Dare - Herndon, VA
Thanks Kim - that's a great suggestion!
Rachel F - Philadelphia