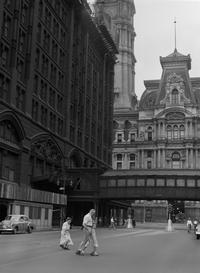 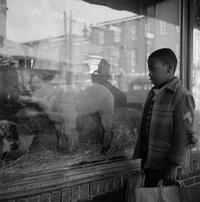 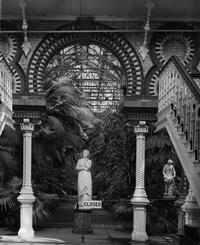 The Print and Picture Collection is happy to announce the addition of over 100 photographic images by William Rapp to our Historical Images of Philadelphia digital collection. Born in 1920, William Henry Rapp, Jr. graduated from Abington High School in 1938, majored in forestry at Penn State, and enlisted in the Air Corps during World War II. Over the years, Bill Rapp sold his work at the Fitler Square Fair, where his neighbors historian Francis W. Hoeber and artist Ditta Baron Hoeber took an interest in his photographs of Philadelphia. When Bill died in 1989, his wife Jean gave the Hoebers a stack of his negatives as a gift, with the direction to donate them to the Free Library when they were done with them. In 2011, the Hoebers arranged with photographer and educator Michael Froio to scan the negatives and make archival digital prints in order to donate the collection to the Library's Print and Picture Collection.

The images in the William Rapp Collection reveal Philadelphia in the mid-20th century, a time when major changes were happening in the city. On March 31, 1952, Rapp documented the last day of the Pennsylvania Railroad’s ferry service between Philadelphia and Camden. Through his lens, we can see Pennsylvania Railroad’s Broad Street Station before it was demolished in 1953 and Horticultural Hall before it was badly damaged by Hurricane Hazel in 1954. A series of buildings photographed in the 1950s and 1960s includes the Greenwich Light Church, which still stands on Oregon Avenue, and the Stetson Building at 5th and Germantown (demolished in 1979).

Bill Rapp’s photographs also include scenes of life in Philadelphia, from a shoe-shine boy on Market Street to a horse and wagon at 9th and Bainbridge. Life in South Philadelphia in the early 1950s is highlighted throughout Rapp’s photos of the Italian Market, but not all of what he captured on film is of an idyllic nature. Included in the collection are some challenging photos illustrating Mummers Parade participants wearing blackface—a practice that was banned in 1964 by the Philadelphia Court of Common Pleas.