Who's The Boss: How Well Do You Know Bruce Springsteen?

So, apparently some guy named Bruce Springsteen is stopping by the Free Library in a couple weeks? All we know is that he's a musician and has a new book coming out or something...

Kidding! We are absolutely a buzz with excitement that The Boss will be hanging out in our hallowed halls! We're pretty sure word has gotten out by now as well around town—it's a little hard not to notice when the guy plays a 4 hour, 3 minute, and 43 second long concert in South Philly.

Bruce's autobiography, Born To Run (and accompanying companion album Chapter & Verse, featuring never-before-released recordings), promises to be a candid look into the musician's life and perhaps separate the man from the myth. While we wait to read the forthcoming 500+ pages, here are some perhaps little known facts and trivia about Bruce Springsteen's life, past and present.

If you need to get up to speed (or perhaps get in an argument with a fellow Springsteen fan, ha!), check out this comprehensive list of The Boss' entire catalog, ranked from best to worst. You can also dig a bit deeper to find out some of the books and authors that have inspired The Boss' music. Finally, you can find lots of great Springsteen-related items in our catalog including music, books, movies, and more! 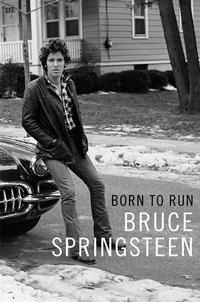 Bruce Springsteen will visit the Free Library on Thursday, September 29 with his new autobiography Born To Run
6 Comments | Add a Comment
What a great blog post! I had fun following the links and especially enjoyed the trivia about President Obama and the Ramones! Thanks for hosting this wonderful event.
Marina Darling - Philadelphia
Great read. Real shame about the ticket sales for his event at the Free Library, site was a mess, fans were shut out. Would give anything to meet him!!
JEFFREY LAWLER - Springfield
Very disappointed in the Library's poor handling of ticket sales this morning. Website now says tickets are sold out. Tickets were advertised to be released at 10 am but at 9:58, the site had already crashed. How is it that the event sold out -- before tickets went on sale?
Rose DiSanto - Philadelphia
The Free Library is most grateful to Bruce Springsteen for choosing our public library to celebrate his book. While we had a limited number of tickets available to sell, we made our best effort to make the tickets available to the public all at the same time. Mr. Springsteen's popularity caused the tickets to be sold out within minutes. We look forward to welcoming those with tickets to the event.
admin - Philadelphia
P.S. Anyone with an extra ticket feel free to let me know!!
JEFFREY T LAWLER - Springfield
Quite an impressive resume for a man like Bruce Springsteen. I was quite informed about him!
Anthony Ali - Philadelphia