When Fitzgerald was Literature's Biggest Fan

With F. Scott Fitzgerald's 120th birthday approaching, we found some interesting connections between his writing and the Rosenbach collection hiding within our literary treasures. Our rare book library includes some fascinating American historical documents but not many examples of American literature. On the other hand, the Rosenbach does house the manuscripts and papers of notable British and Irish writers of the early 20th century, whose work inspired Fitzgerald and his peers. Fitzgerald traveled extensively in Europe after World War I; he had ample opportunity to encounter James Joyce, whose novel Ulysses inspired the Rosenbach's annual Bloomsday celebration, or Joseph Conrad, whose early manuscripts reside at the Rosenbach.

How Fitzgerald met these fellow writers may come as a surprise.

Fitzgerald, like many of his peers, was a huge fan of James Joyce and his groundbreaking novels. But he didn't have an opportunity to meet the Irish author until his friend, Parisian bookseller Sylvia Beach, arranged a dinner party at her home. In her memoirs, Beach included a charming picture (posted above) that Fitzgerald drew of the event. You can't miss James Joyce: He's the floating head with glasses and a sparkling halo. That's Fitzgerald kneeling before him. It's tempting to chalk up this dramatic portrait to artistic license, but it might have been true to life: Joyce's biographer Herbert Gorman reports that Fitzgerald did indeed drop theatrically to his knees and said to Joyce, "How does it feel to be a great genius, Sir? I am so excited at seeing you, Sir, that I could weep."

That is not what one might expect when imagining this meeting of the minds! At the same time, we at the Rosenbach can relate. We too can hardly contain ourselves in the presence of writers we admire. When you love a book deeply, it's hard to express that love to its creator with propriety or panache.

Long before this fateful dinner, Fitzgerald had the opportunity to meet another idol: British novelist Joseph Conrad, best known for Heart of Darkness. This too did not go as expected. As this 1976 New York Times article explains:

When Joseph Conrad made his only visit to America in May 1923, he remained in seclusion at the Doubleday estate in Oyster Bay. Fitzgerald and Lardner felt compelled to pay tribute to Conrad, and—almost certainly inspired by alcohol—decided to perform a dance for Conrad on the Doubleday lawn. Their idea was that Conrad would be so impressed by this compliment that he would want to see them. The predictable outcome was that Fitzgerald and Lardner were thrown off the property with out meeting Conrad.

There you have it. F. Scott Fitzgerald: novelist, screenwriter, and literary fan with no chill. That is a wonderful image to honor during the Free Library's Fitzgerald Day celebrations on September 22. Join us for a thoughtful discussion about Fitzgerald's literary legacy, and remember his exuberant displays of admiration in the presence of his own literary inspirations. Clink glasses with us for a birthday toast, which will fittingly be followed by a dance performance—and then remember Fitzgerald dancing his heart out on a Long Island lawn, because some books are too good to only be read. 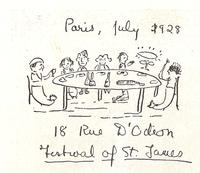 From Shakespeare and Company by Sylvia Beach
Add a Comment