The Patriot's Guide to Taking a Break from the Election

Does the 2016 election have you feeling anxious? Are your news and social media feeds just too much for you some days? Are you randomly and for no reason starting fights with family members? Yeah, me too. But don't lose hope—you're allowed to check out of the election/news cycle for a bit for the sake of your mental health. If you have election stress, try out one of these titles for a quick (but patriotic) mental health break.

Hamilton: Original Broadway Cast Recording
By now I'm sure every last one of us is aware of the blockbuster that is Lin-Manuel Miranda's Hamilton. Well, don't miss your shot (get it?) to sing along with the original cast. Those Schuyler sisters you guys...

School House Rock!'s America
Is there a better way to learn about American history than singing cartoons? I think not. Whether this was your jam during childhood or you are just really into ironic nostalgia, you really can't beat songs like "I'm Just a Bill" or "Sufferin' til Sufferage". Fun for children and possibly good for your inner child!

Parks and Recreation
Whenever I need to feel good about life or teamwork or the slow but deliberate work that leads to progress, I turn to Leslie Knope and the Parks and Rec gang. Who are we kidding, this year has been so weird that I've just been watching it on a loop on a certain streaming site nonstop. New viewer warning—the first season is... interesting. Just start with the last two episodes of Season 2 when Rob Lowe's character makes literally the best entrance. (You'll get that as a joke once you watch the episode). This show is smart and funny and a great way to take a break to feel hopeful about government. Did I mention it's funny?

So take a deep breath, log off for 10 minutes or a whole evening, and treat yourself to a feel-good movie, television show, or soundtrack. Looking for more suggestions? Check out more titles on The Patriot's Guide to Taking a Break from the Election list. 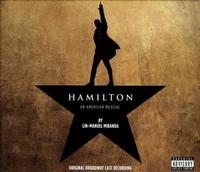 Hamilton: Original Broadway Cast Recording
Parks and Recreation
2 Comments | Add a Comment
Great post... I doubt I will make it to see the Broadway show (ha!), so I will certainly check out the soundtrack to Hamilton.
Camille - East Oak Lane
This rocks! Nothing could be more relevant today!
Karen - W. Mt. Airy