#FLPNoShameNovember: A Tale of Children's Books and Drag Queens.

"I don’t read books written for readers above fourteen," is a constant phrase I use in conversations when discussing books. It’s a truthful statement; as the curator for the Children’s Literature Research Collection, I have to keep abreast of the latest publications for readers between the ages of zero and fourteen. I live for children's literature. I love children's literature. But on the nights when I've reached my limit—the nights when I cannot read another word… there’s reality television.

Specifically, there’s RuPaul Charles and her bevvy of beautiful drag queens. (Wait, what is a group of drag queens called? A Parade? A Kiki? A Strut? Possibly a Quarrel if we go by the latest season of All-Stars. NO SPOILERS!)

This show has it all: Artistry! Performance! Lip-sync battles! Drama! It’s enough to keep anyone entertained. And that is why for No Shame November, I’m proud to come out of the closet as a member of the fan base. I’ve seen every season. Multiple times. I watch the lip sync battles online. I follow the contestants on Youtube, Twitter, and Instagram. I only want more. Bring it on ladies! You have a loud and proud fan in Philadelphia. And there's no shame in that. 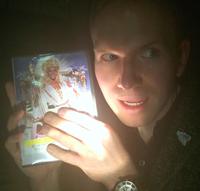 My secret (former) shame is exposed.
No Shame November
2 Comments | Add a Comment

I vote for calling a group of drag queens a kiki... perfect!
Camille - East Oak Lane, Philadelphia Thu, November 17, 2016
I still read Fantastic Mr Fox. It was given to me as a Christmas gift when I was 8 and i read it that same day. Its the 2nd book i truly owned (1st one was Mothers Goose Book of Rhymes and my 3rd book How To Make A Lion Roar). I never knew what happened to my Mother Goose but I still have the other two.
PhDrSeuss - phila Thu, November 17, 2016