#OneBookWednesday: What the Critics Have to Say

In choosing Mark Haddon's The Curious Incident of the Dog in the Night-Time as this year's One Book, One Philadelphia featured selection, the One Book Selection Committee clearly signaled the value they found in this work of literature. As you weigh your own decision to join Philadelphians in picking up this book, let's check out what the critics have to say about it.

This debut novel for author Mark Haddon, published in 2003, won the 2003 Whitbread Book of the Year and the 2004 Commonwealth Writers' Prize for Best First Book, as well as being selected as a New York Times Notable Book.

The New York Times called it "stark, funny and original." Noting the vivid creation of the book’s narrator, New York Times reviewer Jay McInerney describes, "Haddon manages to bring us deep inside Christopher's mind and situates us comfortably within his limited, severely logical point of view, to the extent that we begin to question the common sense and the erratic emotionalism of the normal citizens who surround him, as well as our own intuitions and habits of perception."

Indeed, the book’s narrator, Christopher, is what has drawn in so many readers: Concludes McInerney, "Christopher Boone is an unsolved mystery—but he is certainly one of the strangest and most convincing characters in recent fiction."

The Guardian echoes this praise, noting, "Mark Haddon's study of the condition is superbly realised, but this is not simply a novel about disability. Haddon… uses his narrator's innocence as a means of commenting on the emotional and moral confusion in the lives of the adults around him."

Guardian reviewer Charlotte Moore also finds part of its appeal in its accessibility to multiple audiences: "The Curious Incident is published simultaneously for adults and older children; despite its clarity and simplicity, it operates on several levels."

But don't let the critics convince you; readers have also given it their stamp of approval, recommending it at such high levels as to make it the bestselling novel by a British writer of the decade 2000 - 2009.

Start reading The Curious Incident of the Dog in the Night-Time and then let us know what YOU think! 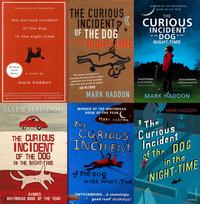