It started, as most things do, with a baby. My daughter was born in March 2013 and much of my time was spent keeping my new charge alive and channel surfing, often simultaneously. But there are only so many episodes of America’s Next Top Model that one can watch before one can no longer smize. I needed a counterbalance. Then a friend suggested The Walking Dead. I settled in on my couch, sleeping cherub in my arms, and fell into a world overrun with the undead. I was hooked.

That spring, I binge-watched all of the seasons of The Walking Dead that Netflix had to offer and caught up to live episodes. I loved the suspense—not knowing who was going to be the next victim and wondering how Rick and the gang were going to get out of increasingly precarious scenarios. I loved getting attached to characters only to lose them when they lost their faces to zombies. I loved the resourcefulness the humans showed. I loved that their survival depended on either working together or leaving someone behind for certain death. But mostly, I loved imagining how I would fare if I was staring down the zombie apocalypse. Would I survive? For how long? What skills did I have to offer? What would I grab when heading out on the road? How much time would we have to get out of the city and to someplace safe? I ran through scenarios in my head all the time.

The Walking Dead was my gateway drug into the world of "Supernatural Post-Apocalyptic Dystopian Fiction". Is that even a genre? I may have just made up that term, but I’m going to play my librarian card and say it’s a real genre. In between waiting for new seasons of The Walking Dead, I started reading books to get my fix. World War Z: An Oral History of the Zombie War by Max Brooks (Mel’s son! With Anne Bancroft!) was easily a favorite. It chronicles a zombie war through a series of first person narrative vignettes. It answers questions that The Walking Dead didn’t about a hypothetical zombie outbreak. Namely, how would it start? How fast would it spread? How far would it spread? What would be the response of the world’s governments? World War Z is brilliant in its macro and micro-examination of the zombie apocalypse, giving voice to survivors from across the globe. It reads like a historical account, which makes it even more deliciously terrifying. And as with most books that turn into movies, it’s even better than the movie. With World War Z, I had even more to work with to fill in the gaps of my imaginary zombie survival plans.

Then I found Justin Cronin’s book, The Passage. Deviating from zombies to vampires, it is a beautifully written story that spanned a trilogy of books detailing how a military experiment gone awry nearly wipes out humanity. Fans of Cronin’s trilogy are often hard-pressed to be taken seriously while speaking of their love of his books. If you say you’re into zombie books, that’s one thing. But mention the V-word and people think you’re talking about sparkly teen vampire romance books. These books couldn’t be further from that. The Passage and the two books that follow, The Twelve and The City of Mirrors, are works of well-crafted literary fiction inspired by Lonesome Dove. They just happen to feature vampires as the means by which humankind is brought to the brink of extinction. *SPOILER ALERT*: Philadelphia is the last city to survive! I mean, we eventually fall, but we hold out the longest! And because my love of this genre is based heavily on imagining myself into these worlds, that’s a big draw.

And let’s not forget about zombie movies and the wide array of sub-genres. My weakness is Zombie Rom-Coms. Yes, that’s a thing. Some of them are great, like Shaun of the Dead, which is hilariously wacky and British. Some are fair to middling, like Zombieland, which features a delightful Bill Murray cameo. Some I shamefully enjoy, including Warm Bodies, which is like Romeo and Juliet, but you know—Romeo’s a zombie! Some are so bad they’re good, like the 80s non-hit, My Boyfriend’s Back, featuring a zombie who returns to take his beloved to prom. I love them all!

So go ahead, fall in love with the end of the world and some "Supernatural Post-Apocalyptic Dystopian Fiction". And if you want to run your zombie apocalypse contingency plans by someone, I’ll be here to answer your reference questions. 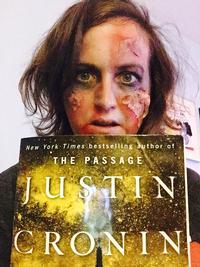