I was about 12 years old when the original groundbreaking PBS 13-part documentary series Cosmos: A Personal Journey debuted. My next older brother was deep into comic books, sci-fi, Star Wars, and Parliament Funkadelic. We only had two televisions in our five-bedroom house. One Sunday evening, my brother dominated the television as usual and I was forced to watch this creepy, nerdy guy talk about "billions and billions of stars". I found myself fascinated with how he took some of life’s and science’s greatest mysteries and explained them with ease. He put it all in terms that a normal person could understand.

As an adult with the increasing adult responsibilities of home making, parenting, career, and the workplace, I found that my sleeping was restless due to continuous thoughts about all of my responsibilities. I decided that if my brain was going to continue to work while I slept, I was going to teach it something. I went searching for something that could soothe my restless brain and educate me at the same time. I went perusing through the vast collection of audio books and then rediscovered the Cosmos series available in our Free Library collections.

I love going to sleep to Carl’s mellifluous tone backed up by one of the most amazing soundtracks, featuring the likes of Vivaldi, Stravinsky, and J.S. Bach. Shamefully, I fall asleep about 30 minutes into each hour-long episode, and if it is streaming, I will awaken in the morning with one of the last episodes in the series. I am rested and I think a bit smarter. I wanted to share this love with you today, November 9, Carl Sagan’s birthday!

Cosmos still holds the ever-growing record for the most watched PBS series of all time globally. I hope you will watch it… but don’t fall asleep! 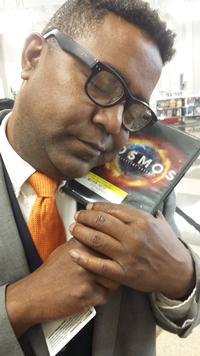 The author with a copy of Carl Sagan's Cosmos series
6 Comments | Add a Comment
Having conked out to many a PBS nature program as a kid, I can empathize!
Carolyn - Roxborough
I remember while working in the ILL dept, you coming in to request this series, and boring me (lol) with your Carl Sagan stories....ahh the good ole days. :)
Kenn (Tina) - Roxborough
Very interesting. I have not tuned into PBS in years but thanks you I will as soon as this evening to see 'Black America since MLK: and Still I Rise'. Thanks Ken
Sherri W - Philadelphia
😉 time to update your hypnopedia selections... David Attenborough is much more relaxing than Sagan
Charles Manns - Philadelphia, Pa.
Not a big science fan when it comes to gaining knowledge but I'll give it a try on a restless night. Who knows, maybe I'll have the urge to break out the old telescope the next day.
E. Felix Walker - Winnetka, Ca.
🎵🎵🎵WAKE UP🎵🎵🎵
PhDrSeuss - phila