What is a dystology? It's a made-up word (made up by author Neal Shusterman, of course); a portmanteau of dystopian and ______-logy, as in a series of books. Is that cheesy? Maybe, but the books are so good!

Part of my job title is Teen Librarian. This does not mean that I'm a teenager who is a librarian, but rather a librarian who provides service to teens. Despite the fact that I celebrated my double sweet sixteen (my 32nd birthday) a couple of years ago, and therefore am not part of the target audience, I read tons of Young Adult Fiction. Normally, I might tell people that I read YA in my free time because I want to keep up-to-date for my job. In the spirit of No Shame November, though, I'm going to admit that the real reason I read YA is because… I love it!

If someone comes into my library and asks for a book I love, I will hand them a copy of Unwind, no matter their age, because this YA dystopian title is relevant, plausible, and truly scary. It transcends its genre to engage a diverse group of readers. I've "book talked" Unwind more times than I can count and I keep my own spare copy in my office in the library. That way, if someone wants to read it, and the library's copy is checked out, they can just borrow mine!

Unwind, the first book in the Dystology series, was published a while ago, in 2007. The sequels, UnWholly, UnSouled, and UnDivided came later, in quick succession, starting in 2012, riding the coattails of the admittedly sort-of-played-out YA dystopian trend. However, this series does much more than just capitalize off of a trend. In my humble opinion, the Unwind Dystology rivals Orwell's 1984 and Huxley's Brave New World, both as an insight into our culture and as a cautionary tale.

The best kind of dystopian story is political. In order to really hook the reader, there has to be an origin story, a reason for the dystopian world to have come into existence. In Unwind, the story begins with a civil war in the United States, the Heartland War. It is a war fought over reproductive rights. After a long and bloody time of battle, someone comes up with a King Solomon and the Baby-style solution: make abortion illegal but give parents the option of having a child "unwound" once the child reaches their teen years if they are still unwanted. When a teen is unwound, their body parts, including their brains, are harvested and used for transplant. Originally proposed as a kind of satirical jest, or a wake-up call to how out of hand things have gotten, unwinding was actually adopted by the government! It is justified as being morally superior to abortion because the child does not die, but rather "lives in a divided state."

The series follows four teens who have been selected for unwinding for four different reasons. Connor is a typical juvenile delinquent and his mother chooses to sign an unwind order for him. Risa is a ward of the state who is slated to be unwound due to budget cuts. Levi is a tithe, the 10th child from a religious family, who donate 10 percent of everything they have, including their children, for the church. He was groomed from birth for this sacrifice and views it as an honor.

To understand the last kid's predicament, a little more backstory is required. Along with unwinding, the practice of "storking" is signed into law. For those who cannot financially afford to raise a baby, they can carry their pregnancy to term and then leave the baby on the doorstep of a wealthier family. If you find a baby on your doorstep, and your income allows for you to take care of it, then you are legally obliged to raise that child, at least until they reach the age of 13 and can be unwound. Mason Starkey was a storked baby and his adoptive parents signed his unwind order as soon as they could. The adventures of these four, and many others who factor into their stories, including anti-unwinding activists, parts pirates, and juvie cops, along with snippets of news stories and campaign ads for various initiatives from the Unwind world, give readers a full picture of this speculative future and the ways in which social issues are handled in an alternative version of America.

The world building in the Unwind books is phenomenal. Unwinding changes many aspects of life. Morality is turned on its head as the majority of the U.S. population learns to treat a segment of its people almost like livestock or merchandise. The field of medicine, for example, takes a completely different turn, as doctors, over time, forget how to heal people and instead just replace parts. Shusterman leaves no stone unturned, crafting a complete universe for his characters to inhabit, while weaving action packed stories that make this series un-putdownable.

If I've convinced you to give the Unwind Dystology a try, and you end up loving it as much as I do, there's good news! In addition to the four main books, you can also read the short story called UnStrung, which is labeled part 1.5 of the dystology, included in a the short stories collection UnBound: Stories from the Unwind World, published in December 2015. Naturally, I was thrilled to learn about this additional book and couldn't wait to learn more about some of the secondary characters of Unwind. Even more thrilling was the news that there is an Unwind movie in the works, which was revealed by Shusterman in the foreword of UnBound! I have a feeling that the movie is going to be a huge hit. Now is the perfect time to start reading Unwind, so you can smugly tell your friends that "the book was so much better than the movie."

I might be the only person well beyond my teen years posting on Instagram about how I'm super stoked for the upcoming Unwind movie, but that's okay, especially during No Shame November! If you want to see more of what I'm reading and doing, follow the Whitman Library on Instagram! 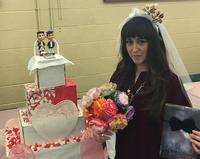 From the "If You Love Books So Much... Why Don't You Marry Them?!" party at Whitman Library.
No Shame November
Add a Comment