I’ve been a vampire fiction enthusiast since the moment I picked up Bram Stoker’s Dracula when I was 12 years old. With diary entries, letters, and creepily intricate details of events and creatures I’d previously thought to be make-believe, the book seemed so real; it made me feel like I’d stumbled upon a true story mistakenly labelled a novel. For me, the book was evidence of vampires’ existence. Yet, somehow, Stoker had cleverly convinced his publisher and every reader before me that it was just a work of fiction.

A few years later, I went on a school trip to the Rosenbach Museum and Library and became even more convinced of the story’s veracity. Containing Stoker’s personal notes from the time that he was writing Dracula, the Rosenbach inadvertently suggested to me that Dracula’s author had first-hand experience dealing with vampires and had written under the guise of fiction to maintain a safe distance from his subjects. It wouldn’t be an exaggeration to say that I thought I’d received confirmation concerning vampires’ realness. To me, they were no more a work of fiction than Stoker himself.

As the years went by, more and more vampire books passed through my hands: Anne Rice’s Interview with the Vampire (and the immensely popular series that followed it), Stephenie Meyer’s Twilight (and the—arguably more—immensely popular series that followed it), Elizabeth Kostova’s The Historian, and Deborah Harkness’ A Discovery of Witches. Of course, the vampires, whether malicious villains or misunderstood outsiders, have also made appearances on the big and small screens: Underworld, The Lost Boys, and Dracula Untold, as well as Buffy the Vampire Slayer, True Blood, and The Vampire Diaries, just to name a few. I’ve seen a lot…

My sustained engagement with vampire stories has not come about accidentally. I’ve been deliberately seeking any and all literature on the undead ever since I read Stoker’s book, and I can still recall one line in particular that lured me into the vampire universe, spoken by Dracula himself: "Enter freely and of your own free will." It seemed like he was daring me to whet my appetite (see what I did there?)—I willingly sunk my teeth in (whoops!), and I’ve been hooked on the taste ever since (okay, I’m done). At this point, I consider myself as much an expert on Dracula’s brood as Professor Van Helsing, but I am not ashamed to say that I am nowhere near done reading this particular sub-genre of fiction. After all, with characters as timeless as the bounds of their lifetimes, there’s enough vampire material out there to preserve my fascination for all eternity. 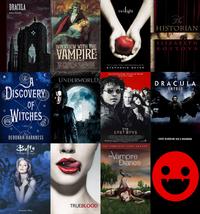