#OneBookWednesday: The Motivation Behind The Curious Incident

We often assume that the novels we read contain some element of autobiographical information. Especially for those of us who aren’t blessed with creative writing talent, it can be hard to imagine how others can craft stories that aren’t at least a little bit rooted in their real lives.

As we read this year’s One Book, One Philadelphia featured selection, The Curious Incident of the Dog in the Night-Time, one may be wondering if author Mark Haddon is like his narrator, Christopher—a unique figure often characterized (although not explicitly in the text) as having Asperger’s Syndrome—or if he knows someone like Christopher and was inspired to tell his story.

He does not. Christopher is purely an invention of his imagination.

He is also not an expert on Asperger’s or Autism, and did not do extensive research on these subjects. "Imagination always trumps research," he says. "I thought that if I could make Christopher real to me then he’d be real to readers. I gave him some rules to live by and some character traits and opinions, all of which I borrowed from people I know, none of whom would be labelled as having a disability."

So what did inspire him? Because this is a book that has equally touched both young and adult audiences, Haddon is often asked if he thought of such cross-over books as To Kill a Mockingbird or The Catcher in the Rye as models. No, he says—"the book most often in my mind was Pride and Prejudice."

On the surface, it can be hard to see how Jane Austen’s classic connects to Haddon’s modern work, other than they both take place in England. But in Austen’s work, Haddon saw characters "bound by iron rules about what they could do, where they could go and what they could say. … Yet Jane Austen writes about these humdrum lives with such empathy that they seem endlessly fascinating." And now we begin to see his depiction of Christopher.

"This was what I was trying to do in Curious Incident. To take a life that seemed horribly constrained, to write about it in the kind of book that the hero would read—a murder mystery—and hopefully show that if you viewed this life with sufficient imagination it would seem infinite."

He has written for both children and adults; with this book, he did both at the same time. So the language is simple and direct, but it goes well beyond the surface. And he aimed to write a book about more than a disability. He wanted to explore the magic of getting inside someone’s head who, from the outside, acts and is different from most.

In Haddon's mind, the message goes beyond embracing those with special needs. "It's about how little separates us from those we turn away from in the street. It's about how badly we communicate with one another. It's about accepting that every life is narrow and that our only escape from this is not to run away (to another country, another relationship, a slimmer, more confident self) but to learn to love the people we are and the world in which we find ourselves.” 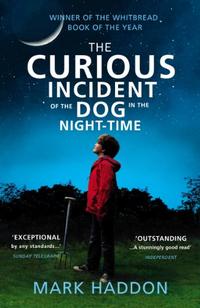