Every year I read a lot of books. This year I’m at 329 and counting (I still have a day left...). This isn’t a strange statement coming from a librarian since it’s pretty much part of the job description—especially for us fiction librarians. And because I’m a librarian, I also enjoy making lists and organizing what I’ve read. The benefit of this is that I have an easy way to pull out my favorites and share them with you every year. I start counting down my best reads of the year every December on the Philbrick Hall Facebook page, but let me take this space to expand on how I choose, rate, and rank my books.

Secondly, I only add books to this particular list that are actually available via the Free library of Philadelphia, either as a print book, an ebook, or both. I feel bad leaving out some great titles, but I’d feel even worse if I told you about something that you couldn’t then get from the library.

And lastly, I only tell you about books that I've actually read. Which means that you’re looking at a snapshot of my reading habits and taste, which might be very different than your own (or eerily similar – who can tell?). You’re going to see a lot of urban fantasy, romance, memoirs, and a random assortment of fiction and nonfiction that’s crossed my path this year. You won’t find mystery or suspense or horror or much literary fiction. In general, I’ve stayed away from mentioning cookbooks even though I do love them and there have been some really good ones released this year. They’re just not the type of book you’d usually read on your commute or lying in bed at night.

I also try to avoid middle books in series. I don’t think it’s fair to list the 4th book in an ongoing series, especially if you can’t read the book as a standalone. This is probably my hardest restriction since there are so many wonderful ongoing series. Maybe my next Favorites list will be for all the series I love…

Before I get started with my list, know that I don’t really rank the titles—there’s a big mess of "books I really liked" and then a much smaller section of "books I adored."  I’ll let you know when we get to them. I’m vaguely breaking these down into genres, so you can skip right to the romances or the fantasies or the memoirs if you want. But since I have excellent taste, I’d recommend that you check out the whole list!

Born a Crime by Trevor Noah
The French Chef in America: Julia Child's Second Act by Alex Prud’homme
The Nordic Theory of Everything: In Search of a Better Life by Any Partanen
How to Make White People Laugh by Negin Farsad
The Geek Feminist Revolution by Kameron Hurley
Grunt: The Curious Science of Humans at War – by Mary Roach
The Secret Life of the American Musical: How Broadway Shows Are Built by Jack Viertel

The Everything Box (Another Coop Heist #1) by Richard Kadrey
Every Heart a Doorway (Wayward Children, #1) by Seanan McGuire
An Unattractive Vampire by Jim O’Doniel
The Ferryman Institute by Colin Gigl
Heroine Complex (Heroine Complex, #1) by Sarah Kuhn
This Savage Song (Monsters of Verity, #1) by Victoria Schwab
All the Birds in the Sky by Charlie Jane Anders
Every Anxious Wave by Mo Daviau
My Best Friend's Exorcism by Grady Hendrix
Borderline (The Arcadia Project, #1) by Mishell Baker
Wax by Gina Damico

The Hating Game by Sally Thorne
Roller Girl (Lake Lovelace, #3) by Vanessa North
His Royal Secret (His Royal Secret, #1) by Lilah Pace
How Not To Fall by Emily Foster
Idol (VIP, #1) by Kristen Callihan
Let It Shine by Alyssa Cole

***Absolute Favorite Books of the Year***

And Every Morning the Way Home Gets Longer and Longer by Fredrik Backman
Backman's A Man Called Ove was my most favorite book of 2014 and this novella is on par with it. A loving and poignant story of coping Alzheimer's, it is a beautiful meditation on how to say goodbye to someone who is disappearing without dying, and how they say goodbye to those they are leaving behind.

The Last Adventure of Constance Verity (Constance Verity #1) by A. Lee Martinez
Constance has been saving the world since she was seven years old. But the world's greatest adventurer is tired and wants a normal life. The only way she figures she can break her curse and reset her life is to track down and kill her Fairy Godmother... I like my urban fantasy with a hefty dose of humor and snark, and this delivers in spades.

The Wall of Winnipeg and Me by Mariana Zapata
Vanessa just quit her job as PA to the world's most irritating and entitled football player. But now he's on her doorstep asking her for a life-changing favor. This book is for those of us who like our heroes alpha, our heroines badass, and a slow-burn romance that will keep you hooked.

Hamilton: The Revolution by Lin-Manuel Miranda and Jeremy McCarter
The complete libretto of Hamilton, along with the story of creating the play and music from demo tape to opening night. And yes, even reading the lyrics made me cry.

The Invisible Library (The Invisible Library, #1) by Genevieve Cogman
Imagine a huge multidimensional library that collects every book ever written in every dimension. Add in an intrepid junior librarian adventurer, her assistant sidekick who might be more than he seems, and the world's greatest detective. This is a super-fun, world-spanning romp that had me enthralled from beginning to end.

You can see all of my favorites from this year, plus my selections from past years, as well as many other Staff Picks and recommendations from other librarians through our currated lists in our Library Community and links to our Catalog! 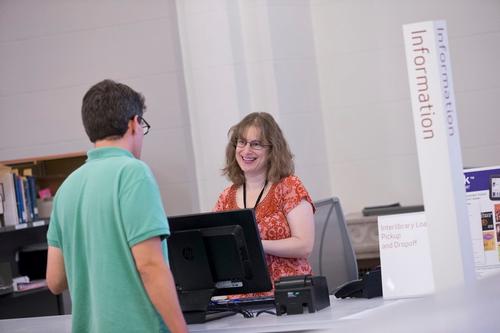 Dena's Favorite Books of 2016
1 Comment | Add a Comment
Do you keep a journal with notes on the books that you read?
Sharyn Flanagan - Germantown