As you may still be reflecting back on last year, the Free Library is also looking back at our most borrowed books of 2016. It should come as no surprise that The Girl on the Train by Paula Hawkins reigned supreme in traditional book borrowing, but some other top titles may surprise you. Our top ebook download from 2016 was Me Before You by Jojo Moyes, with The Girl on the Train running a close second.

Here are some of our most popular books that were checked out from a number of our library locations throughout 2016, in no particular order:

The most checked out book at this library was Pete the Cat: I Love My White Shoes by Eric Litwin. Having read this book countless times to my own children, I completely understand its popularity. #2 was The Very Busy Spider by Eric Carle, #3 Pete the Cat's Train Trip by James Dean, and #4 (finally) The Girl on the Train.

I suppose it shouldn't be too surprising, but #1 is an old favorite, Green Eggs and Ham by Dr. Seuss. #2 was Diary of a Wimpy Kid: The Long Haul by Jeff Kinney, #3 Ten Apples Up On Top! (again by Dr. Seuss), and a tie for the fourth most borrowed books: Ruby by Cynthia Bond and The Score by Kiki Swinson.

The Girl on the Train was most borrowed book at Northeast Regional Library, with the D. Gray-Man series by Katsura Hoshino coming in second most borrowed. Rounding out the list were #3 Mouse Overboard! and #4 Mouse House Hunter, both by Geronimo Stilton, and another tie for fifth place—by the same author Lisa Scottoline—Every Fifteen Minutes and Corrupted.

Again, the #1 title is everyone's favorite, Sam-I-Am in Green Eggs and Ham! #2 was Blue Exorcist by Kazue Kato and John Werry, #3 Cold Mountain by Charles Frazier - our One Book, One Philadelphia pick for 2016, #4 Fox in Socks by Dr, Seuss, and #5 Friction by Sandra Brown.

#1 is Pokemon Adventures, and not surprising when you learn that this particular library hosts a Pokemon gym.  #2 was A Deeper Love Inside by Sister Souljah, #3 Diary of a Wimpy Kid: The Long Haul makes another apperanace at #3,  #4 The Monkey on My Back by Debbi Morgan, and #5 Between the World and Me.

#1 Go Away, Big Green Monster by Ed Emberley ran away with the top title at McPherson Square Library.

Manga and teen titles reign supreme in our newly reopened location in South Philly with Blue Exorcist taking the top spot. Second most borrowed title was Pokemon Adventures: Diamond and Pearl by Hidenori Kusaka (they also have a Pokestop here, in case you are planning to visit), #3 Pretty Guardian: Sailor Moon by Naoko Takeuchi, and #4 Avengers Assemble by Joe Caramagna. We finally see a children's title with the fifth most borrowed book, The Very Hungry Caterpillar by Eric Carle. Adult titles came in with a tie at #6 with Between the World and Me by Ta-nehisi Coates and Help Your Kids with Math.

The Girl on the Train led the way at Independence Libray with many other familiar titles following it.

Out of the top 11 borrowed books at Bustelton, nine were Diary of a Wimpy Kid books, with One Fish, Two Fish, Red Fish, Blue Fish by Dr. Seuss coming in at #5 and The Girl on the Train #8 mixed in for good measure.

The most popular titles borrowed in 2016 across the entire Free Library were: 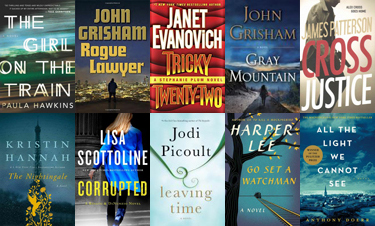 While we can't predict which titles will take the prize in 2017, the following books currently have the longest wait lists, so keep an eye out for (and put a hold on):

The most popular titles borrowed in 2016 across the entire Free Library were...
1 Comment | Add a Comment
This is very interesting. Was wondering how the "one book Philadelphia" selections have done. BTW: I put a hold on "Moonglow" by Michael Chabon today.....I am 152 out of 152. Maybe the library needs to purchase a couple more copies of this book? Or other popular titles? How many hold requests before the library does consider adding copies?
Valorie Morrissey - Philadelphia