So, what’s the story with Abraham Lincoln wearing a leather biker jacket?

If you’ve ever entered or exited Parkway Central Library through the back door on Wood Street, you might have seen the picture in question. It gets lots of admiring comments, so in honor of Presidents Day (and Lincoln’s birth month), we thought it deserved a little attention and explanation:

Lincoln could never have worn a leather jacket because he died in 1865 and the jacket style wasn’t created until 1928. So what’s up with the picture?

Though the picture now hangs above Central Senior Services on the first floor, the space used to be the home of the Patent Collection in the Government Publications Department. As the story goes, the picture was created for a patent exhibit in the 1990s by a former Free Library graphic designer named Marcelle Moraux. Lincoln is in the picture because he’s the only U.S. president to have registered a patent. He’s in a jacket with zippers to commemorate the 100th anniversary of the zipper patent in 1993. As for Lincoln’s patent, it was for a device to lift riverboats that had run aground on sand bars. He started work on the device in 1848 when he was a U.S. congressman representing Illinois, and he registered it in 1849. Apparently, he was traveling home from Washington when his boat got stuck on a sandbar, giving him the idea. There’s no indication that the device was ever marketed, but it’s more proof that Abraham Lincoln was an extraordinary man! 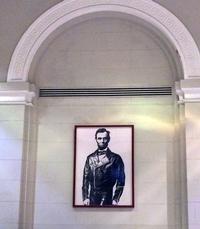 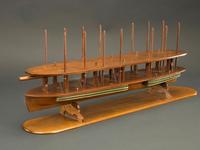 Zipper Patent Diagram
3 Comments | Add a Comment
Good
Yusuf - Tajikistan voce
Thank you so much for your Smithsonian expression as examined. It is wonderful in its minut detail. Hugo
Hugo V. Presentado - 4123 Lancaster Avenue, 2nd Fl Rear Philadelphia
Very efficiently written information. It will be beneficial to anybody who utilizes it, including me. Keep up the good work. For sure i will check out more posts. This site seems to get a good amount of visitors.
Charles Ferguson