While other metropolitan cities have seen a decrease in rates of violence over the past several years, Philadelphia's have risen astronomically. Since January 1, 2006, the city has seen 290 murders. Tonight's Talk About It! discussion, Caught in the Crossfire: Kids and Violence in Philadelphia , will invite the community to come together and discuss this crisis. Tonight's event will cap off a series of pre-summit branch meetings that were held throughout September at the Frankford, South Philadelphia, Greater Olney, and Paschalville Branches. Moderated by Dr. Michael Eric Dyson , the panel will include audience participation. A large turnout is expected--it should be a great evening. Remember, Talk About It! is absolutely free, so come to the Central Library tonight at 7:00 p.m. and voice your opinion! 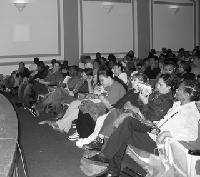