Talk About It! Nonviolence Summit an Inspiring Evening 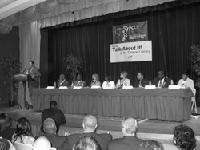 Last night’s Talk About It!, Caught in the Crossfire: Kids and Violence in Philadelphia, was an electrifying event. Turnout was spectacular, with overflow crowds taking seats in the Main Lobby to watch the simulcast.

Normally, Talk About It! Q&As last about an hour, but last night’s spilled over until a little after 9:00 p.m. to accommodate the enthusiastic audience. It was an eclectic bunch--everyone from foster parents to ministers to teachers to Philadelphia public school students had something to say. The panel in turn wowed the crowd, especially Dr. Dyson, who managed to quote the Bible, Nas, Jay-Z, Biggie Smalls, Talib Kweli, Tupac Shakur, and W.E.B. DuBois in the same breath.

Many questions were asked and many observations were made. The overall feeling was that the night’s discussion could only do so much--immediate action is needed. Below, please find links to get more information about some Philadelphia organizations that are dedicated to pacifism and community building.

Men United for a Better Philadelphia

Blueprint for a Safer Philadelphia