#MysteryMonday: The History of Mystery: A By-No-Means-Exhaustive Timeline

The Free Library is exploring the history and art of the mystery with We the Detectives, a unique, multifaceted, and immersive intellectual and creative experience. Here we track the growth of this fan-favorite genre—now one of the most popular for young and old readers alike.

1841
Widely considered to be the first story of its kind, Edgar Allan Poe’s “The Murders in the Rue Morgue” is published in Philadelphia. Check out pages from the manuscript in person at the Rare Book Department’s Becoming the Detective: The Making of a Genre and the Rosenbach’s Clever Criminals and Daring Detectives!

1887
Sherlock Holmes makes his debut in Sir Arthur Conan Doyle’s “A Study in Scarlet,” ushering in the golden age of mysteries.

1920
Dame Agatha Christie publishes The Mysterious Affair at Styles, her first of more than 80 cozy mysteries that follow the exploits of Belgian sleuth Hercule Poirot and crime-solving spinster Jane Marple, among others.

1927
Young readers get in on the game with the start of the popular series The Hardy Boys, created by Edward Stratemeyer and published under the pseudonym Franklin W. Dixon. Nancy Drew—also a creation of Stratemeyer—solves her first case in 1930.

1929
Ellery Queen—the pen name of cousins and co-writers Manfred B. Lee and Frederic Dannay—publish The Roman Hat Mystery and go on to write more than 30 books over the next four decades. 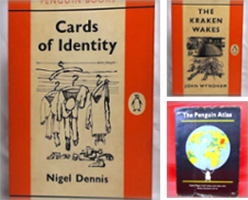 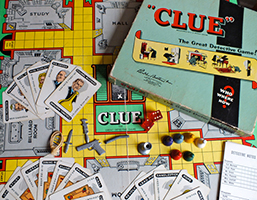 1949
It was Professor Plum in the conservatory with the knife! The board game Clue launches, inspiring kitchen-table sleuths worldwide.

1952
“Bond. James Bond.” The notorious spy introduces himself to the world in Ian Fleming’s Casino Royale.

1957
Perry Mason first appears on television, perhaps the most enduring of the detectives who make the leap from page to screen throughout this post-war decade.

1963
MI-6 spy David John Moore Cornwell (you may know him as John le Carré) publishes The Spy Who Came in from the Cold. After its success, le Carré chills out and retires from espionage to write full time. 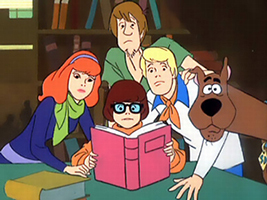 1980s
On the page, Kinsey Millhone, Sue Grafton’s famous private investigator, starts working her way through the alphabet with A is for Alibi. She’s still cracking on to this day, having made it to X in 2015. Onscreen, we meet Jessica Fletcher, a contemporary Miss Marple from Maine, in Murder, She Wrote. 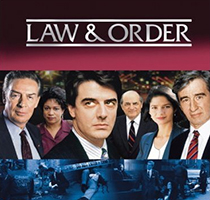 1990s
Dun dunnn...  Law & Order premieres, kicking off two-and-a-half decades of spinoffs and cementing itself as a permanent TV fixture. Walter Mosley publishes the first of his famed Easy Rawlins mysteries, Devil in a Blue Dress.

Get clued in yourself! Visit the Rare Book Department’s Becoming the Detective: The Making of a Genre and the Rosenbach’s Clever Criminals and Daring Detectives—on view through September 1, 2017.

Take a journey through the history of mystery!
Add a Comment