#MysteryMonday: Get Clued in to Edgar Allan Poe and More

Move over, London! England’s capital city may count Sherlock Holmes and Hercule Poirot among its resident gumshoes, but only Philadelphia can be called the true birthplace of the modern detective tale.

In celebration of our city’s honored place in the history of the mystery, the Free Library is exploring the art of crime and detection with We the Detectives, a unique, multifaceted, and immersive intellectual and creative experience. Becoming the Detective: The Making of a Genre and Clever Criminals and Daring Detectives draw from the rich collections at the Free Library of Philadelphia and the Rosenbach to bring crime stories front and center, uncovering what has made this form of literature one of the most enduring and popular.

Pages of the handwritten manuscript of Edgar Allan Poe's "The Murders in the Rue Morgue"—long recognized as the first detective story of its kind—are on display in both the Parkway Central Library’s Rare Book Department and the Rosenbach, in the exhibitions running through September 1, 2017. The caper was written when Poe lived in Philadelphia and was first published in our city’s Graham’s Magazine in 1841. This story follows detective C. Auguste Dupin as he picks his way through a puzzling double-homicide in Paris. And though the tale may come to an improbable conclusion—which we will leave readers to discover on their own—it set the stage for a generation of mystery writers to run with and perfect the construct.

The manuscript and story also provide the backbone for GUMSHOE, the theatrical component of We the Detectives, produced by New Paradise Laboratories.

The story contains now-common tropes that highlight its impact on the creation of the detective genre: the brilliant amateur detective, the first-person narration, and Dupin’s use of deductive reasoning to reach his conclusion.

And perhaps just as intriguing as the history of the story is the provenance of the manuscript itself. The rare gem was first retrieved from a trash bin at the printer’s office in Philadelphia, only to be tossed and rescued again during the new owner’s move. It miraculously survived two fires in that owner’s office before avoiding major smoke damage from a neighbor’s subsequent, though unrelated, fire. Several years later, the manuscript once more found its way into a trash bin, rescued at last by a neighbor whose keen eyes spotted it.

Says Becoming the Detective curator Karin Suni: "I just think there’s a bit of magic in it!" Come see the magic for yourself, and get clued in to the fun of We the Detectives! To learn more, visit freelibrary.org/detectives.

We the Detectives endeavors to explore the art of crime and detection through two unique exhibitions and a multifaceted, immersive theatrical experience. 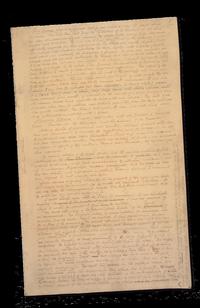 Check out pages of the handwritten manuscript of Edgar Allan Poe’s “The Murders in the Rue Morgue” at the Rare Book Department and the Rosenbach.
2 Comments | Add a Comment
I took part in the Gumshoe/We The Detectives presentation on April 8th, and it was just delightful. Thank you.
Lori McGinn - Philadelphia, PA
Thanks to the staff for making it an amazing experience! Would love to do another one!
Barb Hafner - Philadelphia