Confessions from a Shakespeare Lover

Happy birthday (and death day, crazily) to William Shakespeare on Sunday, April 23! This day is a literary holy day, honoring The Bard, most hallowed of English-language writers. (Let us leave aside debate of whether "Shakespeare" wrote Shakespeare’s works—I am a believer, as well as a believer that the debate is beside the point, anyway.)

Many revere the man whose name itself is a metaphor for beautiful writing (e.g., ‘I’m no Shakespeare’); others have only bad memories of high school days trying to decipher Hamlet and not understanding Shakes’s backward sentences and seemingly olde English. (Shakespeare was indeed writing in modern English.) I myself am a groupie/phile/buff/devotee of the deepest measure, having read my way through The Complete Works and truly enjoying his word—and sword—play.

Why do I love him so? Let me count the ways. (See what I did there?)

He gave us so many now-modern English words and phrases
Shakespeare knew how to manipulate language to make even the mundane sound lofty—but if the language he knew didn’t have a ready word for what he wanted to express, he just made one up! His scripts include nearly 2,000 words and phrases that had never before been heard (or put in writing, at least) as he used them. Some were taken from other languages, some were mashups of existing words, and some used existing words differently.

He gave us, among others:

bated breath (The Merchant of Venice)

He makes my brain dance—and science agrees!
"My brain feels good" sounds odd, but I truly feel a sense of mental uplift and excitement while reading Shakespeare’s plays. It turns out, science has an explanation! Reading Shakespeare and other challenging classical words has been proven, via brain scanners, to set off more electrical activity in the brain than the same texts ‘translated’ into simpler language. The same study, conducted by scientists, psychologists, and English academics at Liverpool University, found that reading such works triggers self-reflection and is more beneficial for mood than reading self-help books.

English professor Philip Davis, who worked on the study, explains: "Serious literature acts like a rocket-booster to the brain."

He is funny
Some of Shakespeare’s comedies have great slapstick and buddy-comedy moments. (Some are also major cheese, as with the twins who are confused for one another in The Comedy of Errors.) And sure, some of his humor was of the ‘wink-wink’ variety, with banter laced with sexual undertones. All the better for luring 9th graders into Shakespeare’s web; they’ve bought in by the second page of Romeo and Juliet after they hear “Draw thy tool” before the first sword fight.

If you haven’t done so before, have some fun with the Shakespeare Insult Kit!

He captures the essence of so many feelings so beautifully
Poetry in general, and Shakespeare in particular, make feelings feel even more. His words and sentence structure elevate his characters’ every thought. In The Merchant of Venice, Bassanio says, “…you have bereft me of all words,/ Only my blood speaks to you in my veins”—which beats “I love you a lot” any day.

'She’s pretty': “The brightness of her cheek would shame those stars” (Romeo and Juliet)

'That sounds crazy!': “Every wink of an eye some new grace will be born.” (The Winter’s Tale)

No matter what, Shakespeare’s impact on our modern world—from our words to our TV shows (House of Cards and Empire are both based on Shakespearean plots)—can’t be denied. As Ben Jonson said in his eulogy for Shakespeare, “He was not of an age, but for all time.” I couldn’t agree more. 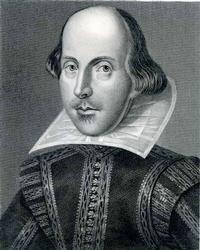 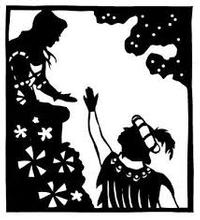