NFL Draft Not Your Thing? Check Out These Worldly Alternative Footballs!

The NFL Draft is coming to Philadelphia! And it is happening on the front lawn of the Parkway Central Library—the Benjamin Franklin Parkway. But perhaps the American football craze isn’t your thing, in which case you may be feeling a little left out of the party. We’ve got you covered! While 200,000 fans will be checking out NFL Draft Experience festivities, April 27 - 29, we are taking a world tour of all the other footballs out there...

Soccer
The original football—still known as football (or fútbol or footie) in most of the rest of the world. It is the most popular sport in the world, boasting the most watched competitions and the highest professional pay. It is also one of the most accessible team sports in the world, with youth turning any swatch of terrain into makeshift football fields—all that’s needed is a ball. Its popularity has been growing in the United States. Although American football rules in the U.S., because it is generally considered too rough for children, soccer is still one of the most played sports by children. And with the Women’s National Soccer Team consistently ranking as one of the best in the world, it’s been hard for Americans not to become a little more tuned in to this world-wide phenomenon.

Rugby
The other ancestor of American football, rugby is often described as a cross between what we know as soccer and football. It is also known as ‘football without pads’. In addition to being incredibly tough (hits in rugby are just as hard as in football, but since there are no helmets, players do not hit with their heads), rugby players must be incredibly fit—there is no break between tackle plays; the ball is cycled back up and play continues. Here’s the rundown on how rugby works:

Rugby is played worldwide. It made its Olympic debut at the 2016 Rio Summer Games.

Australian Rules Football
Run by the Australian Football League, this game shares some common threads with rugby: long field, goal posts, contact sport, no pads. This game—the most popular sport in Australia—is a little more chaotic to watch though! Players can use any part of their bodies to move the ball: primarily, they kick it or move it with their hands, but they cannot throw it; instead they ‘handball’ it, which looks something like a volleyball serve. They can tackle by wrapping their arms around an opponent. If a player catches a ball from a kick, he or she is awarded a free kick. Oh, and there are FOUR goal posts. High Aussie excitement!

Flag Football
We may think of this as a lesser football, played by college intramural teams and others wanting to enjoy the strategy and fitness of American football without the contact. But this sport has an international following, capped by the bi-annual IFAF (International Federation of American Footbal) Flag Football World Championship. Sweden, Germany, Israel, Austria, Japan, Canada, Italy, France, and Thailand all field teams in what is a surprisingly intense competition.

Gaelic Football
Ireland has its own football too! This version has both a net, like soccer, and goal posts with a cross bar, like rugby and American football. Players can move the ball up the field in all manner of ways: carrying, bouncing, kicking, hand-passing, and soloing (dropping the ball and then kicking it back into the hands—what?!). Outright tackling is not allowed, but shoulder-to-shoulder contact and ball slapping are. It is only played at the amateur level; players and coaches cannot receive any form of payment. It is just for the love of the game!

Ba’ Game
This game is a version of medieval football played in Scotland. It began during Viking times with a—wait for it—severed head as the ‘ball’. It is now played annually around the end of the year in a town-wide match; literally, the playing area is an entire town, and the number of players can number in the hundreds. The Ba (ball) can be kicked or carried,  and although it is considered ‘mob football’, nowadays players generally don’t get hurt.

So while American football may rule the day in the United States, it's clear that the other footballs of the world are nothing to snuff at. May you enjoy—or avoid, if that's more your thing—the NFL's time in our great city! 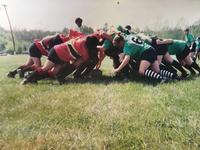