How about something fun or provocative to get a great start on your summer reading? These new titles are coming to a neighborhood library near you in June: 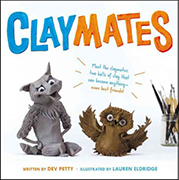 Claymates written by Dev Petty and illustrated by Lauren Eldridge
Two balls of clay are carefully sculpted into a gray Wolf and a brown Owl.  But as soon as the sculptor leaves the room, that is where the fun begins.  Wolf and Owl, clay mates, begin a game of imagination and transformation that will entertain and inspire little ones to think outside the box.

Finding Mighty by Sheela Chari
For ages 10 and up, this is a fast-paced mystery set in New York City and Dobbs Ferry, NY.  Twelve year-old neighbors, Myla and Peter, are trying to solve the disappearance of Peter’s older brother, Randall.  Includes everything from a cache of uncut diamonds, a menacing gang, and the urban sport of parkour, to graffiti art.

The Gentleman’s Guide to Vice and Virtue by Mackenzi Lee
A young bisexual British lord and his best friend/secret crush set out on a tour of Europe in this historical, romantic, and outlandish adventure set in the 18th Century.

The Ministry of Utmost Happiness by Arundhati Roy
In a graveyard outside the walls of Old Delhi, a resident unrolls a threadbare Persian carpet. On a concrete sidewalk, a baby suddenly appears, just after midnight. In a snowy valley, a bereaved father writes a letter to his five-year-old daughter about the people who came to her funeral. In a second-floor apartment, a lone woman chain-smokes as she reads through her old notebooks. At the Jannat Guest House, two people who have known each other all their lives sleep with their arms wrapped around each other, as though they have just met.  This is a braided narrative of astonishing force and originality; at once a love story and a provocation, it is novel as inventive as it is emotionally engaging.

The Best Land Under Heaven: The Donner Party in the Age of Manifest Destiny by Michael Wallis
In the 19th century US, Manifest Destiny was a belief that was widely held that the destiny of American settlers was to expand and move across the continent to spread their traditions and their institutions, while at the same time enlightening more primitive nations.  On April 16, 1846, a group of settlers left Illinois to start a new life in California. Wallis retraced the ill-fated journey of the Donner and Reed families to new land out west using survivors' accounts, trip diaries, and other contemporary sources to uncover the backgrounds and dynamics of the multiple families involved.

And add some action to jumpstart your lazy summer days with this film coming in June... 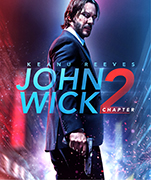 John Wick: Chapter 2 directed by Chad Stahelski, starring Keanu Reeves
Revisit John Wick in this action-packed sequel as he travels to Rome to repay a debt, fighting against the most vicious assassins.

New Titles Coming to the Free Library in June!
Add a Comment