We read all year long, but there’s just something about summer reads. There’s an excitement, a tingle, to determining your Summer Reading list (even if there’s not much delineating that list from those of pre- and post-summer). Summer also smacks of nostalgia—so what better time to revisit some old favorites? Check back each week to see what oldies-but-goodies (or perhaps not-so-goodie anymore!) our staff is digging into.

Remembering a Favorite
There was something as a kid about just saying the name "Basil E. Frankweiler." What a name, right? And so From the Mixed-Up Files of Mrs. Basil E. Frankweiler has long stuck in my mind, a remembered favorite childhood read. I remember loving it, although I couldn’t say at what age I read it. And I long ago mostly forgot what those files entailed, and what lay inside this perennial favorite—which is celebrating the 50th anniversary of its publication this year.

Before cracking it back open, surely some 20 years after first reading it, I tried to recall its glory. I remembered a file cabinet—although perhaps the title just imprinted this image on my mind. The only scene I recalled was of two kids hiding in the back of a school bus so as not to have to get off with everyone else. And that it was a kidventure that gave me a certain kid-confidence—inspired by kids making their own way in the world.

As I re-entered the world of Claudia and Jamie Kincaid, certain elements came back—Oh right, they ran away to New York City! To the Metropolitan Museum of Art—of course! But it had been so long, much of the rest was like reading it entirely anew.

Diving Back In
Upon this rereading, I found that I mostly mis-remembered the details of the actual story. Having carried the title close all these years, I convinced myself somewhere along the line that the primary conflict was sorting through those mixed-up files. This impression was quite far afield—Claudia and Jamie only meet the eponymous Mrs. Basil E. Frankweiler some 40 pages from the end of the book, and her files only enter the scene for all of four pages. So I spent much of the preceding 160 pages wondering, “Where are those files?” Perhaps I have become too literal-minded for this YA classic.

(But really—I do think this book may have been misnamed. The children have only an hour with the files, and they aren’t really mixed up at all; they are just filed creativity, and the children just had to find the right folder. I had a vague (incorrect) memory of them puzzling through her whole filing system, using reason and logic to solve the mystery. Really they just have to guess the right keyword.)

I also found myself wondering whether its ‘classic-ness’ still held up. Would young readers today love this with the same love, or would it now seem terribly simple/boring/old-fashioned? Hard for this 30-something to say, but a few references certainly date it: electric percolator, traveler’s checks (I don’t even know if these still exist), petticoat, petit fours. But again, maybe I was getting too bogged down in the details, and discounting the essence of adventure that would surely lure modern young readers.

As a now-parent, I did find myself loving the lessons embedded along the way—tucked in as character quirks and kid-provided wisdom (rather than parent-down dictums). Jaime emphasizes the importance of saving money and budgeting well, not allowing them the extravagance of taking taxis or the bus. Claudia instills a routine in their days, requiring learning, laundry-doing, and teeth-brushing. They are also great models for taking initiative—they fill their days and don’t waste the opportunity to soak up all they can, recognizing the once-in-a-lifetime opportunity of living in a museum. Look, kids—learning is cool!

There are larger lessons, too: the magic of secrets, using what you learn (and not just accumulating facts), the necessity of art for art’s sake (vs. the science of it). But I found these less memorable, less impactful, than the takeaways of the kids’ ingenuity and efforts to solve their Michaelangelo mystery.

The Classic Lives On
This book—winner of the 1968 Newberry Medal—was and continues to be so beloved by so many. Staff at the Met received so many questions about it that they developed "Mixed-Up Files" tours and published an issue of its MetKids magazine devoted to the book. Some of the specific works of art mentioned in the book are no longer at the museum. But this love letter to New York—which also includes trips to the public library, Grand Central Station, and the United Nations—still sparks a sense of exploration and wonder in readers of all ages. I now can't wait for my next museum visit.

And odds are, in another few months I will again remember the book as I always have. It’s hard to let go of long-standing, treasured impressions! 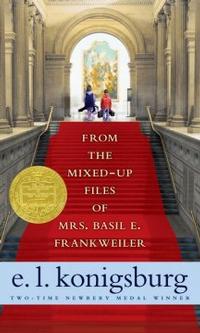 E.L. Konigsburg's Newbery winner From the Mixed-Up Files of Mrs. Basil E. Frankweiler marks its 50th anniversary this year.
1 Comment | Add a Comment
I enjoyed introducing children to this boo when I worked for the FLP. They really liked all her books, even the more esoteric ones. I recently found a good pb copy at my library book sale and am planning to dig in!
Susan Golden - North Carolina (former FLP librarian)