Today’s #MysteryMonday is also some nostaligia-on-the-19th—we’re catching up with one of our favorite crime capers, the big-hatted, red-coated Carmen Sandiego.

She made her debut in 1985 in the at-that-time incredibly high-tech Where in the World Is Carmen Sandiego? computer game. On the heels of a crime, desk-chair sleuths were charged with tracking down Carmen and her cohort of accomplices in one of 30 countries, guided by clues of their whereabouts.

Unlike some of our other #MysteryMonday honorees, Carmen was the villain—stealing national treasures and heading up the criminal organization V.I.L.E. (Villains’ International League of Evil—can’t get any more villainy than that!). Working as agents of the ACME Detective Agency, kids themselves drove the investigations (guided by the mysterious but benevolent "Chief").

A game update was released in 1992—a Deluxe edition—that wowed with features including digitized photos from National Geographic, music from the Smithsonian/Folkways Recordings, and an additional 30 countries. It was also notable for being the first game to feature spoken dialogue.

It went on to become a children’s game show as well, taking players out from behind the computer screen and putting their deductive crime-solving powers to the test in front of an audience. But for most budding gumshoes of the era, it is most remembered as an exciting classroom staple (ranking up there with Oregon Trail). Computer games at school—alright!

In the guise of a game, Carmen Sandiego taught map skills and international culture, reasoning and logic, and crafty wordplay. And let’s not forget the top-notch vocabulary; "spelunking" became forever embedded in my adventure vocabulary (and a major life goal).

The franchise followed the initial games’ success with additional books and shows, including Where in Time... and Where on Earth... iterations. The learning continued with a slew of video-game spinoffs that included Where in Space Is Carmen Sandiego?, Carmen Sandiego Math Detective, and Carmen Sandiego Word Detective.

And now, Carmen is making a come-back! Following the trend of bringing back ‘80s and ‘90s pop culture staples (see also: Jem and the Holograms, Dirty Dancing, Ghostbusters, Power Rangers), Carmen Sandiego will be coming to Netflix in a new animated series, voiced by Gina Rodriguez (Jane the Virgin). 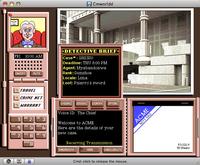 Where in the World Is Carmen Sandiego? computer game screenshot

Promo image for forthcoming Where in the World Is Carmen Sandiego? Netflix animated series, voiced by Gina Rodriguez
Add a Comment