James Joyce’s Ulysses and its reputation were not unknown to me before my tenure as Facilities Manager at the Rosenbach. The running joke I had with my friends as I was going through the application process was that I should really quickly read Ulysses before my interview… my subsequent peals of laughter were deafening.

For those of you not in the know, the manuscript of Ulysses is one of the Rosenbach’s most treasured possessions. Every year on June 16, we celebrate Bloomsday with Joyceans around the world by hosting a festival in front of the Rosenbach, during which passages from the novel are read aloud throughout the course of the day. While my position here does not require me to be a scholar of any kind, my formal training as a printmaker and draughtsman—and my genuine appreciation for the Rosenbach’s fine art collection—was a more-than-adequate personal tie to the organization and it’s collections, rounding out my more relevant qualifications to completely secure my position.

In the fall of my first year here, a staff Ulysses class was offered. I jumped on board for a variety of reasons. Most importantly, I did not want to fake my way through another Bloomsday (one was enough!). I assumed spinning my anticipated dislike of that novel, in a way that puts it in a favorable light, would be easier than verbally darting around small talk that would out me as having not read Ulysses at all. Followed close behind in my rationale was the appeal of reading this book with my colleagues, which should afford some interesting discussion, solace, and commiseration.

So my reading adventure began, and much like Ulysses' protagonist Leopold Bloom (and our dear Homeric Odysseus, who served in large part the inspiration for Joyce’s work), I was full of presumptions and was rather unprepared for where the journey would actually take me. I am not going to lie… it wasn’t easy. In that case, at least, my presumptions were correct.

Admittedly, there were several episodes that I completely hated: Sirens, Cyclops, and Oxen of the Sun spring to mind instantly as particularly painful to get through. Sirens and Cyclops were just so loud; I couldn’t hear myself think, which is odd since I was alone in a quiet room reading. Reading Oxen felt like crawling a mile over broken glass. Oh, so brutal.

Just like life (which, if you ask me what Ulysses is about, is my answer… life), there are unpleasant moments, but also great joys, wonders, and beauty. Calypso, where we first meet Bloom and which marks the first occasion that I laughed out loud during the course of my reading, is episode 4, mind you. Circe—oh the delights of Circe—with all of its glorious hallucinogenic imagery and clear indications of who is thinking, or speaking… mostly clear… well, rather clear for the book in question. Ithaca, with all of the answers, though the answers are not necessarily to the questions that were asked. I found that there was much more Ulysses to love than I ever had thought possible. I completed the class and finished Ulysses, surprised to find myself a Ulysses liker.

I closed the book and figured that was the end of that.

I read a passage at the following Bloomsday (the last few pages of Circe!), and I was genuinely proud of my accomplishment, delighted that I did not have to either fake having read it or lie about my enjoyment of the book.

Every year, the Rosenbach offers two Ulysses classes. I smiled to myself as last fall’s offerings were posted, and recounted the hours I had spent with Ulysses months ago, and curiously a nearly imperceptible itch began to form in the back of my mind—the itch to read it again. I found myself proselytizing to interested parties about the merits of the Ulysses reading groups. I lobbied to others, who expressed the desire to read, but were intimidated by the reputation, "…but, I have read it! If I can read Ulysses, you can. There is an episode for everyone in Ulysses."

The class’s start date grew closer and the more I thought about a reading group going on without me, the bigger the itch grew in the back of my brain. Read it again? Two days before the class started, I signed myself up. I was off, this time through the now-charted waters. But I knew there were perils ahead (the thought of rereading the Oxen of the Sun episode did not sit well with me.)

I think the second time IS the charm. Ulysses is jammed pack with content, allusions, and clues as to what is to unfold later on in the book. If you have ever looked at an annotated version of Ulysses, you will notice (with either awe or horror) that the annotations are longer than the book, and the book is not short! The language and style is so challenging that the first time through I focused on just reading all the words, understanding what I could and leaving the rest behind, always looking forward.

The second time through, I was actually able to pick up on an astounding amount of foreshadowing, clues, cues, and other literary morsels. It started to make real sense to me, upon reading, not just when I was discussing with my peers. The language was still challenging, as stream of consciousness writing styles usually are. Joyce seems to have something against punctuation and something against clearly dictating to his audience exactly how to read what he has written. You have to be present enough to make those determinations on your own. The second time through, I was braced for those challenges, and knowing what was coming, allowed me to pick up on much of the foreshadowing that was helplessly lost on me the first time.

While Sirens and Cyclops were each still too loud for me to enjoy, the path that is Oxen of the Sun was seemingly devoid of broken glass, and I could comfortably walk (read) that mile upright, head held high! My favorites still remain favorites: this Bloomsday past I read Circe’s finale again, because I could not give up a part I loved so very much, and loved even more the second time. Audible laughter arose from me well before episode 4, and quite possibly before page 4. Quite a few other episodes wore their charms on their proverbial sleeves. All of our characters became more dimensional, more honest, and Dublin more real.

A curious thing has started: I feel an itch in the back of my brain that has grown stronger as I have been writing this post. There is another class this fall and I know I have only begun to scratch the surface of what lies in Ulysses. I think that itch needs to be scratched. 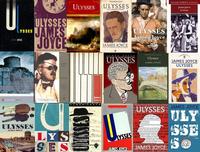