Do you ever have dreams or memories that are just flashes of a scene that you vaguely remember but don’t know how or why? When that happens to me, I can usually trace it back to a book or movie that I consumed as a kid. I used to have a recurring dream about a man urging his son to cross a rickety bridge in an old car. There was also a room with a massive spider. I thought for years it was just something I made up, but realized almost a decade later that my brain had been replaying scenes from Neil Simon’s Murder by Death, which I probably saw when I was way too young.

But I’ve always known exactly where some of the flashes come from and often they’re from Escape to Witch Mountain by Alexander Key. The book was published in 1968 and I probably read it when I was about 9 or 10. I remember the copy I read had the movie tie-in cover.

Here’s what I remember about the book before re-reading it for the first time in at least 30 years:

That’s it, and in all truthfulness, I have no idea if what I’m remembering is from the book or the movie, since I probably read and watched them at about the same time.

So, let’s see if I love this book as much as an adult (and if what I remember is correct). Here's the stream of consciousness notes I took while rereading:

Chapter 4
Friendly and credulous Priest who conveniently knows just the person who can help!

Chapters 6 and 7
Jailbreak AND Manhunt! With bears!

Chapter 10
The Evils of Communism! And aliens!

This was a roadtrip/escape story aimed squarely at kids, and while I had forgotten huge chunks of it, the bits that I did remember, I remembered perfectly. I had forgotten the friendly priest and I never realized until now that the book is told squarely from Toby's point of view. So it's a great book for boys even though I completely identified with it as a small girl. But this is a fun book about kids taking their own destiny in hand and doing what needs to be done to get out of a pretty scary situation.

After reading the book I decided to rewatch the 1975 movie adaptation as well and realized pretty fast that I HAVEN'T seen it before. It really does not age well, and the story is only tangentally related to the book. My advice is skip the movie—the only interesting thing about it is that it stars a very young Kim Richards (of Real Housewives of Beverly Hills fame). 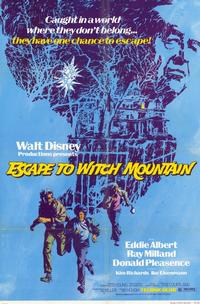