Can you believe that we’re talking about September already? Finding a common theme in this month’s titles was elusive, so September’s main claim to fame is being used as the unifying feature – Back to School. If you’re dreading the return to the classroom, we have new titles that will help you escape to your happy place. Or, if you’re looking forward to the return of peace and quiet that the school day will bring, check out these titles to enjoy your new-found quiet time. There are new titles for the whole family throughout our catalog or at a neighborhood library near you! 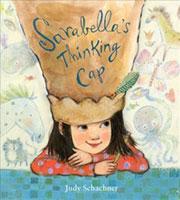 Sarabella’s Thinking Cap by Judy Schachner
Sarabella is a thinker and a dreamer. In school, her understanding teacher worries that she may need help focusing.  A new assignment helps Sarabella reveal and share her powerful imagination. Sarabella’s wild and inventive thoughts are beautifully illustrated by local author/illustrator Judy Schachner, in a lovely ode to daydreaming and to staying true to oneself.

The Stars Beneath Our Feet by David Barclay Moore
12 year-old Lolly is dealing with the gang-related murder of his older brother and pressure to join a "crew" in his neighborhood in Harlem. Then his mother’s girlfriend brings him two large bags of loose LEGOs that were being discarded at the toy store where she works. Lolly loves them, but this huge pile came with no instructions. Find out what Lolly builds and the new relationships he forges in this great new book!

Warcross by Marie Lu
From New York Times bestselling author Marie Lu comes a SciFi thriller set in the world of competitive online gaming. Emika Chen works as a bounty hunter for the worldwide gaming obsession Warcross – tracking down people illegally betting on the game. But when the game’s designer asks her to go undercover in this year’s tournament to discover security leaks will she, and the world, be prepared for what she finds?

Autonomous by Annalee Newitz
Earth, 2144. Jack is an anti-patent scientist turned drug pirate, traversing the world in a submarine as a pharmaceutical Robin Hood, fabricating cheap scrips for poor people who can't otherwise afford them. But her latest drug hack has left a trail of lethal overdoses as people become addicted to their work, doing repetitive tasks until they become unsafe or insane. Hot on her trail, an unlikely pair: Eliasz, a brooding military agent, and his robotic partner, Paladin. As they race to stop information about the sinister origins of Jack's drug from getting out, they begin to form an uncommonly close bond that neither of them fully understand. And underlying it all is one fundamental question: Is freedom possible in a culture where everything, even people, can be owned?

The Last Castle: The Epic Story of Love, Loss, and American Royalty in the Nation's Largest Home by Denise Kiernan
The story of Biltmore, the Vanderbilt mansion in Asheville, NC, spans two world wars, the Jazz Age, the Great Depression, and features a cast of real life characters including Edith Wharton, the Fitzgerald’s, and Thomas Wolfe. Kiernan follows the lives of Vanderbilt-fortune heir George and his wife, Edith Stuyvesant Dresser, who, after George's sudden death in 1914, led Biltmore through WWI and saved her husband’s beloved obsession.

All Eyez on Me
Chronicles the life and death of Tupac Shakur from his early days in New York City to his evolution into being one of the most recognized, influential, and controversial voices in the world before his untimely death at the age of 25. Against all odds, Shakur's raw talent, powerful lyrics, and revolutionary mind-set propelled him into becoming a cultural icon whose legacy continues to grow long after his passing. 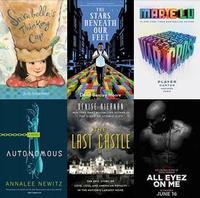