Banned Books Week celebrates the freedom to read and brings national awareness to censorship of literature. This week puts a spotlight on books that have been challenged or whose access has been restricted in schools or communities. (A book "challenge" is a request for removal or restriction; a book that is ultimately removed is considered "banned.") Libraries and schools have long been at the forefront of supporting the freedom to read. We at the Free Library are eager to celebrate Banned Books Week by highlighting valuable, powerful books we love!

Children’s, teen, and young adult books are popular targets for challenges and bans, fueled by concerns about age appropriateness. The increasing spotlight on LGBTQ youth and bullying has led to an increase in LGBTQ characters and themes in children's and teen books, with titles like I Am Jazz and Two Boys Kissing, which have topped the challenged/banned books list. Plenty of adult books make the list as well, with challenges and bans typically revolving around books that include LGBTQ, sexual, cultural, racist, political, or religious content.

Books that we consider beloved classics—including Sylvester and the Magic Pebble, The Lorax, The Diary of Anne Frank, Fahrenheit 451, Little Women, and The Color Purple—have also been challenged or banned. In July, Chinese authorities decided to ban Winnie the Pooh—not because of content in the book itself, but because of bloggers' frequent comparisons between Winnie and the Chinese president. Last year’s Top 10 Challenged Books in America included major award winners, as well as books that include honest and realistic depictions of teenage sexuality and one book that was challenged not because of its content, but because of its author. Hugely popular, well-loved children’s and teen books have also been challenged and banned, despite (or sometimes because of) their popularity—books like Captain Underpants, Drama, and The Hunger Games, which fly off the shelves here at the Free Library of Philadelphia.

Often challenges occur at the local level, with a group attempting to remove material from the school curriculum. After challenges from parents, some schools have ultimately removed controversial books from their reading lists, including Lord of the Flies, The Autobiography of Malcolm X, and Beloved—books that deal with important issues of violence, race, and history.

In our modern world, many people are surprised to learn that books are still challenged and banned. Banned Books Week aims to highlight the value of free and open access to information. A great way to celebrate is to look at banned book lists to learn what books are challenged or banned, and then choose a book from the list to read. This year, I am reading The Giver for pleasure and have selected Where the Wild Things Are to read for storytime here at the Free Library. Teachers looking to celebrate can choose challenged or banned books to highlight in the classrooms and share lessons throughout Banned Books Week about the value of seeking and expressing ideas, even those some consider unorthodox or unpopular.

The Free Library of Philadelphia supports and believes in the freedom to read and is a great place to find and celebrate books on all topics, featuring characters of all kinds. 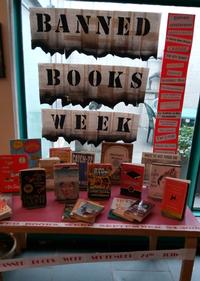 The increasing spotlight on LGBTQ youth and bullying has led to an increase in LGBTQ characters and themes in children's and teen books, with titles like I Am Jazz and Two Boys Kissing, which have topped the challenged/banned books list. 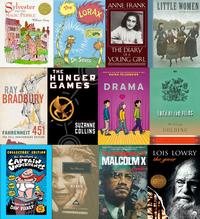 Books that we consider beloved classics have also been challenged or banned.
Add a Comment