Turning the Heat Up on Banned Books: Book-Free Dystopian Societies

We’ve been celebrating banned books this week, giving big readerly hugs to books that have been challenged, banned, or censored in some way. The Free Library—joined by our fellow book-loving librarians, teachers, publishers, journalists, and readers—believes in the freedom to read widely, proudly, and deeply AND to express ideas and issues of all stripes.

Here on the blog we’ve been highlighting titles that have at various points come under fire for their content or language. Today, we’re going to explore the sticky, no-good places challenges and bans could lead us as a society. Beyond the headlines of history (and today, unfortunately), the fight for freedom of expression is frequently found in the pages of fiction itself.

Nearly 65 years ago, Ray Bradbury imagined a society that literally set fire to ‘troublesome’ books—which was in fact considered to be ALL books. His Fahrenheit 451 depicts a future America in which all books are outlawed, to protect citizens from "offensive" ideas and topics. People could be so happy, don’t you see, if only they didn’t let those pesky books get them down. And of course, a non-reading society is a non-thinking society—giving all the more power to the government. Bradbury gave us a glimpse of the nonsense, meaningless conversations that would fill out days with only screens to feed our minds. (Literally—the walls of Bradburian living rooms are top-to-bottom screens, and people spend full days in their "company.")

Fahrenheit was preceded, in 1932, by Aldous Huxley’s Brave New World, which also imagined a world focused on pure happiness and enjoyment. Here, too, literature is outlawed. Surrounded by a population that takes soma to stay in a dreamy state of mental escape—fun fun and only fun!—two characters are "awakened" to the power of feelings and ideas through reading Shakespeare. Literature, Huxley seems to be telling us, is essential to knowing ourselves and to our functioning in the world.

If books are policed to keep us from coming in contact with so-deemed inappropriate, offensive, or unhappiness-inducing material, it is not a far climb to trying to rid society of people who represent those ideas, and then the ideas themselves. This is the world George Orwell explored in 1984, written in 1949 and in which the Thought Police sought out those thinking "unapproved" thoughts. Protagonist Winston’s job is to literally rewrite history—by rewriting news articles—to fit with the reality of today. Leaders wanted to ensure citizens followed—and believed in—the norms of the state, and of course, any access to unapproved written material threatened that allegiance.

It is not hard to see the parallels between these fictional societies and our own. (It’s a little frightening how spot-on some authors were about our current society.) For these authors, one of the worst things they could imagine for society was the absence of books. Fascinatingly—and perhaps hilariously ironic—these books have all been targeted with challenges or bans! Brave New World was considered anti-family and anti-religion. 1984 was banned not only by individual schools but by some governments for its political messages. And Fahrenheit 451 took heat (ha!) for depicting the burning of the Bible. Have these critics no shame, banning books about book banning because the depictions of book banning were upsetting?!

The worlds Bradbury, Huxley, and Orwell created all depicted the taking away of books—of ideas and truths—as a means to make individuals happier. Yet we know that life is not all happy, and books both reflect that truth and help us grapple with it. If life sometimes makes us uncomfortable, it is of a necessity that books sometimes will as well. And just as we sometimes grow from challenge and other times we overcome it, so too do we grow from some reading material and decide we disagree with other works.

Such is the beautiful, powerful nature of books and the essence of our freedom to read anything and everything. Thanks for joining us as we mark Banned Books Week 2017 and celebrate our RIGHT TO READ! 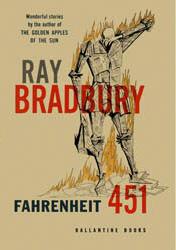 Fahrenheit 451 depicts a society that burns all books. 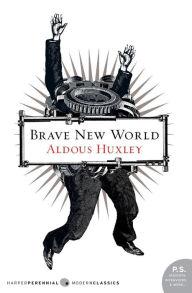 In Brave New World, literature is outlawed—people want to feel only good, all the time. 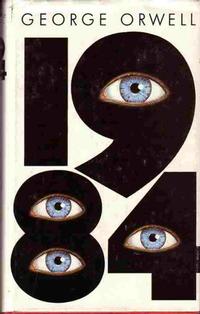 The leaders in 1984 tried to ban all 'unapproved' thoughts altogether.
Add a Comment