Last week was a big week over here at the Free Library – we announced the 2018 One Book, One Philadelphia featured title, marking the start of the 16th season of One Book! So as we sit back, read, and reflect on Jacqueline Woodson’s Another Brooklyn as a city over the next several months, you may be wondering: How does that title get chosen, anyway?

Here’s how it goes down:

A small committee of Free Library staff, educators, and One Book volunteers drafts a long-list of potential titles, bringing their own ideas to the table while also considering suggestions from the community that lend themselves to current issues of the day.

First and foremost, the committee is guided by a set of criteria. The book has to…

After several meetings, committee members spend hours upon hours reading suggested titles. The list is then whittled down to a handful of titles on a shortlist. Following more deliberation and discussion, two or three titles are chosen. Then committee members vote!

It is a long and deliberate process, but an important one – the featured title is the cornerstone of One Book, One Philadelphia, engaging the city in a shared conversation and touching the lives of tens of thousands each year through hundreds of vibrant programs across the city for adults, teens, and children alike.

While some years there is much discussion and debate, with Another Brooklyn it was very clear early on that this book was an ideal fit and one that we'd be moving forward with. The beautiful, poetic language, along with the themes of friendship, coming of age, and neighborhoods, are things we all can relate to, and the fact that it touches on "growing up girl" within an urban environment is something the committee felt was timely. This book is thematically rich, offering many avenues for Philadelphians to connect, which helped it gather committee consensus very quickly.

Also unique to 2018 is that for the first time in One Book’s 16-year history, the middle-grade and children’s companion books are written by the same author: Jacqueline Woodson’s Brown Girl Dreaming and This is the Rope: A Story From the Great Migration, respectively. Because Woodson is so beloved among librarians, educators, and readers—especially young people—the committee felt it was an extraordinary opportunity to feature three important works by one author in the same year, and one that just so happens to be a National Book Award, Coretta Scott King Award, and Newbery Medal award-winner, at that! We hope Philadelphians agree!

For a look back at our past picks, visit freelibrary.org/onebook. 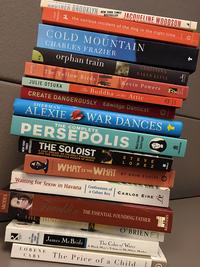 Sixteen years of One Book, One Philadelphia titles!
Add a Comment