Cowell, Cage, and Crumb: The Interconnectedness of American Arts

When reading up on music history, it's often interesting to see how composers and performers of the day coexisted, often relating to each other and even working together. For example, pianist Margaret Leng Tan (b. 1945) has worked extensively with composers John Cage (1912-1992) and George Crumb (b.1929) throughout her career. Notably, George Crumb composed his new work Metamorphoses (2015-2017) for Leng Tan. Inspired by ten paintings and Crumb’s personal tribute to Modest Mussorgsky's Pictures at an Exhibition, (1874), like Makrokosmos (1972-1979), in Metamorphoses Crumb requires theatrics and vocals from the pianist. Exclusively for toy pianist and toy instrumentalist Leng Tan, Metamorphoses features toy piano and other small percussion instruments. Leng Tan will perform the Philadelphia premiere of Metamorphoses, along with works by John Cage and Henry Cowell, at the Barnes Foundation on November 8, 2017. Video projections by Monica Duncan will complement the performance with "atmospheric visual textures."

This cultural give and take that extends across disciplines is another link shared by the three C's. For example, American artist Jasper Johns (b. 1930) references John Cage’s composition The Perilous Night in his 1982 painting of the same name. Additionally, this painting is one of the ten that Crumb used for inspiring his new work, Metamorphoses. Cage was also known to be influenced by painters, as his idea for 4'33"’ was in part sparked by his friend, American painter Robert Rauschenberg (1925-2008) and the artist's monochromatic White Paintings (1951). Cage, like many contemporaneous composers, networked and formed relationships with others in his field. His penchant for experimental music and works for percussion ensembles helped him to acquire and propagate works by fellow composers like Lou Harrison (197-2003) and William Russell (1905-1992).

While Henry Cowell (1897-1965) borrowed a lot of content from Irish folklore, rather than painting, for his experimental piano works like The Tides of Manaunaun and The Banshee, like Cage he actively promoted the works of his contemporaries. Cowell developed a reputation as an advocate of modern Pan-American composers and published their works in his subscription publication New Music before these pioneering artists were recognized by established music publishing houses. Cowell also ran modern music festivals that showcased the works of such composers, including John J. Becker (1886-1961). It is commonly held in musicology circles that when one scratches the surface of the 20th century, they always seem to find Cowell.

This is the second in a series of posts over the next few weeks that explore the three C’s relationships to each other, American music, and the Fleisher Collection.

To view correspondence with these composers and the Fleisher Collection, browse our Digital Collections. 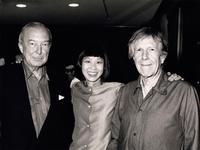 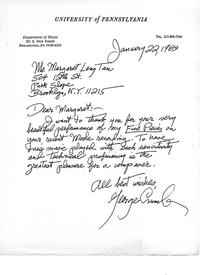