It’s fitting that our Mysterious Travelers concert for this coming Monday deals with the department housing the Library's resources on the occult and the afterlife. So be in the Montgomery Auditorium at Parkway Central Library on October 30, one day before Halloween, for a program inspired by the weird and uncanny resources in the Free Library’s Education, Philosophy, and Religion Department. Drummer Chad Taylor will premier this newest program in our Internal Investigations series, in which bandleaders meet with Free Library librarians, explore the treasures in the Parkway Central Library collections, and write new music based on their findings.

Up Next: Voodoo & The Afterlife Featuring Chad Taylor
Co-starring the collection & expertise of the librarians in the Education, Philosophy, and Religion Department 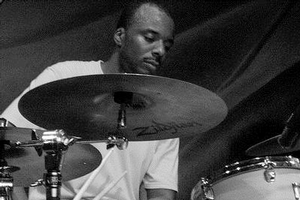 Chad Taylor (b. 1973) is a composer, educator, percussionist, and scholar who is a co-founder of the Chicago Underground ensembles. Originally from Tempe, AZ, Chad grew up in Chicago where he started performing professionally at the age of 15. Chad has performed on over 75 albums and with artists as diverse as Pharoah Sanders, Marc Ribot, Eric Revis, Kurt Rosenwinkle, Matana Roberts, Darius Jones, Lou Donaldson, and Roscoe Mitchell. Chad leads his own band Circle Down, whose debut album was given a five-star review by the All Music Guide. In the review, critic Michael G. Nastos writes: "What is remarkable is that there is no wasted motion, no histrionics or grandstanding, as pure emotion is translated to superlative music making on this most highly recommended recording, one for the ages." 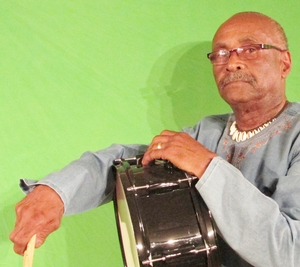 The people who flocked downstairs likely already recognized Dwight from Sounds of Liberation fame or his work with jazz vibraphonist Khan Jamal. For us in the Music Department, Dwight spent his time preparing for this concert by researching our vinyl records of Brazilian percussion and folk, which then also led us to pre-revolutionary tunes celebrating(!) dictator Batista, and other topics related to Dwight himself, such as Music Education in Philadelphia. We had no idea what the concert would shape up to be as we filed into our seats with the rest of the folks to see the all-star band of Philly jazz veterans: upright bassist Charles Beasley, saxophonist Umar Raheeem, percussionist Napoleon Black, and keyboardist Bernard Samuels. They riffed on his findings of exotic percussion in the Music Department, and Black's conga polyrhythms gave new textures to the tunes. The musicians played in lock step with each other, even when they were soloing, it was less like five different musicians showing their skill than five different limbs communicating on one body.

What we came away with was a celebration of music and libraries as well as a program supplemented with celebration, surrounding the birthday of John Coltrane (he would've been 91 on September 23). At one point, Dwight implored the audience to throw out all their albums and listen to only Coltrane, before the band launched into Coltrane's "Equinox". This author took his advice and checked out the library's copies of Giant Steps and Lush Life the next day, though his other albums are still intact.

You can come to the Music Department to listen to these Coltrane albums on wax, check out the CDs for yourself, or take advantage of our digital Coltrane collections by navigating to our Jazz Music Library, where Coltrane is a featured artist.

Saxaphonist Umar Raheem twirls a flurry of notes over the textures of Black, Beasely, Samuels, and James.

Exotic percussion and polyrhytms inspired by the Music Department's collection of Brazail and Cuba gave the foundational groove for most of the night.

We’ll see you Monday night, October 30 at 7:00 p.m. in the Parkway Central Library's Montgomery Auditorium for Chad Taylor riffing on the collections from the Education, Philosophy and Religion Department!