Celebrating a Centennial: A Look Back on the History of the Parkway and the Parkway Central Library

"Once constructed, it will remain a thing of beauty and a joy for all generations to come," declared the Parkway Association in its 1902 Proposed Parkway plan. We, the generations to come, have seen this promise borne out. The Benjamin Franklin Parkway is an international hallmark in the heart of Philadelphia. As it celebrates its centennial, we are paying tribute to our place on this boulevard magnifique and its cherished role in the life of our city.

The Idea
The diagonal roadway running from City Hall to Fairmount Park had first been proposed after the Civil War. City planners and citizens alike saw creating a grand expanse akin to those in other cities as both essential to and befitting the dignity of the city of Philadelphia. "It would place Philadelphia on a par with the leading cosmopolitan cities of the world," attested Chas F. Warwick, mayor of Philadelphia from 1895 to 1899.

Paris’s prime promenade, the Champs-Élysées—dotted with cultural institutions, gardens, and shops—served as a model. Planners also looked to the avenues of other cities, big and small: Mexico City's Paseo de la Reforma, Berlin’s Siegesallee, and Buffalo's Lincoln Parkway. In the later 19th century, there were several designs drafted for such a boulevard in Philadelphia, but these plans were ultimately abandoned during an economic downturn.

It was not an idea, however, city leaders and planners were willing to let die. In 1902, the Parkway Association compiled The Proposed Parkway for Philadelphia, a detailed plea and plan "for the purpose of bringing to success that project for a diagonal boulevard from City Hall to Fairmount Park." It mounted this campaign as a fight for Philadelphia's soul: "If Philadelphia … confesses itself unequal to this splendid project, it will admit that it has no just place among the leading cities of the modern world."

Supporters sought not only to bring beauty to the city, but to alleviate urban congestion and uplift the city. This mindset was inspired by the City Beautiful Movement—an embrace of the French neoclassical architectural principles of symmetry, balance, and grandeur—which aimed to instill a sense of pride and belonging in residents.

The Building of a Boulevard Magnifique
In 1903, following its report, the influential Parkway Association persuaded the City Councils to restart the Parkway Project. In 1907, architects Paul Philippe Crét, Horace Trumbauer, and Clarence Zantzinger conceptualized the grand promenade, and demolition of the area began. Factories and neighborhoods were removed in preparation for the new Parkway.

The Free Library's place on the Parkway was not a given. In their quest for a permanent site on which to construct a dedicated central library, officials had considered the old U.S. Mint Building and demolishing the Academy of Music to create a site.

Head Librarian John Thompson urged the Parkway planners to give a main-library building a prime spot on the Parkway path, initially requesting a plot "at the city entrance of the magnificent Boulevard."

In early 1910, library officials successfully petitioned Mayor John E. Reyburn to set aside a piece of land on the proposed Parkway for the building of the library. The mayor and library officials worked diligently, acquiring by the summer of 1911 our current plot bounded by 19th, 20th, Vine, and Wood streets for $213,625. That fall, the Philadelphia House Wrecking Company demolished the existing structures, clearing the way for the new library.

In the fall of 1911, Rudolph Blankenburg succeeded Mayor Reyburn, and the new mayor questioned the city’s capacity to fund the extravagant Parkway. Fearing that the Parkway would be abandoned, jeopardizing the library, Head Librarian Thomson rallied the city’s education and cultural institutions, which successfully pressed for the continuation of the boulevard’s construction.

In this same year, architect Horace Trumbauer and his chief designer, Julian Abele—one of the first university-trained African American architects—developed plans for the façade of the Free Library’s main building.

Abele, who headed the project, unveiled a striking Beaux-Arts design for both the library and the neighboring family court, based on the twin façades of the Place de la Concorde's Hôtel de Crillon and Hôtel de la Marine. The library design was approved the following year, but construction was delayed until 1920.

In 1917 the Fairmount Park Commission hired Jacques Gréber, a prominent figure in urban planning and design, to update the 1907 design for the Parkway. In the Gréber plan, Logan Square—transformed into a circle—served as the central anchor of the boulevard, again drawing inspiration from the Place de la Concorde on the Champs-Élysées. Construction of the Parkway officially began following the adoption of Gréber’s plan.

By 1926, the construction of the Parkway was considered complete, although many of its iconic institutions had not yet taken their places. The Parkway Central Library opened its doors in 1927—the first newly constructed building on the Parkway—and by 1935 the Franklin Institute, the Rodin Museum, and the Philadelphia Museum of Art had all been erected. Originally named the Fairmount Parkway upon completion, in 1937 Philadelphia’s iconic strip was renamed to honor Benjamin Franklin.

The Parkway Today
Today the Benjamin Franklin Parkway is a hub of Philadelphia’s civic life, housing some of the city's most iconic cultural centers and hosting such annual city celebrations as the Wawa Welcome America 4th of July concert and fireworks and theThanksgiving Day parade. It received national and international spotlight during Pope Francis’s visit in September 2015 and the NFL Draft in April 2017. The Parkway Museums District now encompasses 17 destinations, dotted by sculptures, fountains, and greenery and capped by Dilworth Park at City Hall and Fairmount Park to the north.

As new institutions take up residence on its borders, new parks and public spaces come to life, and the roadway itself is refurbished, the Benjamin Franklin Parkway continues to adapt to meet the needs of the institutions that call it home and the people who traverse it every day. A true center of arts and culture, with Robert Indiana's LOVE statue greeting visitors in John Kennedy Plaza and the colorful flags of 90 nations waving along the boulevard’s length, this Philadelphia icon embodies the core values of our City of Brotherly Love and Sisterly Affection—just as the planners dreamed more than 100 years ago.

This story was originally featured in our Fall 2017 issue of Off the Shelf, a biannual publication with news and features from across the Free Library of Philadelphia system. 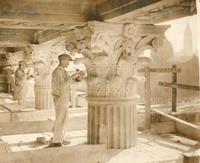