Another Brooklyn is so rich with sound that I can hear it. I want to slide it onto a record player and spin myself back to white go-go boots and Al Green.

1970s. Inimitable young August has moved from Tennessee with her father and brother to Bushwick, where "a tinny radio from somewhere on the block seemed to play 'Rock the Boat' all day long"… where kids yelled not it on the sidewalk to the sound of the tinkling Mister Softee ice cream truck … where August would sit on her neighbor’s stoop to have her hair braided, dozing off to the hum of "Amazing Grace" or "In the Upper Room."

Another Brooklyn weaves music and story together with memory, communicating the deep imprint that music has. In one scene, August’s father is in their kitchen, but lost in a memory of her mother, incited by Dorothy Moore on the radio. Reading this, I remembered how Alzheimer’s patients can be transported back to their memories just by hearing an old song. It’s almost like music is a physical experience that lives in our bodies.

Throughout Another Brooklyn, August and her three best friends hear songs everywhere that don’t live in their bodies—Top 40 stories that aren’t their own. "How had the four of us, singing along to Rod Stewart and Tavares and the Hues Corporation, not turned our radio just that much to the right or left and found Cecil Taylor, Ornette Coleman, Miles Davis?"

"If we had had jazz," she begins her story, "would we have survived differently? If we had known our story was a blues…would we have lifted our heads, said to each other, This is memory…?" Even though, as August says, the girls didn’t have jazz to help them know who they were, their friendship came together "like improv—half notes tentatively moving toward one another until the ensemble found its footing and the music felt like it had always been playing."

There is music in the way we all move through our lives. The right song can make us feel heard, and seeing some of ourselves in pop culture creates an opportunity for us to feel reflected in the world. I guess that’s how we are shaped—or isolated—by the culture around us.

I’m celebrating the One Book Reading Period (happening now!) with this Another Brooklyn playlist of music mentioned in the book. Listen while you read, or read while you listen. And, if you have songs that instantly bring back memories for you, leave them in the comments and we can put together a community playlist. Now that would be fun! 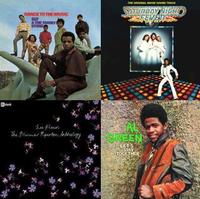 Some artists from our staff-created soundtrack for the 2018 One Book, One Philadelphia novel selection, Another Brooklyn
Add a Comment