Art of the Nature Printed Book

Nature printing is a term that encompasses several different printmaking processes for making direct reproductions of natural objects. The simplest and most direct of these is something most people will recognize: a plant, ideally one that has been flattened, is inked and then an impression of it is made on paper. Known examples go back to the 13th century but surely the practice dates to the beginning of all human creative endeavor. An impression taken directly from a sage leaf can be seen in one of Leonardo Da Vinci’s notebooks along with instructions for making such prints.

Despite much experimentation in intervening centuries, the techniques used by Francis Daniel Pastorius and Joseph Breintnall in 18th century Germantown and Philadelphia were essentially the same. Breintnall’s annotated nature prints are a treasure trove of information about the local flora and botanical activities of his contemporaries, such as John Bartram, who provided many of the specimens he recorded. In addition to their usefulness as scientific and historical records, Breintnall’s prints were arranged with an artistic eye. These beautiful prints are held in the Library Company of Philadelphia, where Breintnall worked as Secretary from the founding of that institution.

Benjamin Franklin collaborated with Breintnall and adapted nature printing techniques to reproductions on a much larger scale. Franklin and his printing partner David Hall created paper currency that included nature printed leaves as an anti-counterfeiting device. This required metal printing blocks and Franklin devised an ingenious casting method that has been the subject of speculation until very recently when one of these blocks was recovered at the Delaware County Institute of Science.

Jane Colden was an 18th century American botanist who was a contemporary of Franklin and Breintnall. Her botanic manuscript was a sophisticated record of her scientific observation and she made use of nature printing as a way to directly document specimens.

The photographic revolution of the 1840s brought about the next major technique employed to create multiple printed copies of a natural object from the object itself. Many of the first photographs were nature prints. Anna Atkins and William Henry Fox Talbot were among those who used the new process to document botanical specimens by using the plants themselves.

Another major technological innovation made it possible to create more detailed and accurate nature prints than ever before. The prolific Viennese printer Alois Auer experimented with many different processes during his time at the Austrian State Printing House. Aided by the technique of electroplating, which had been introduced to the world around the same time as photography, he was able to develop a method that allowed for much larger editions taken from a single nature print than ever before. The Auer method involved making an impression of a plant in a soft metal and then creating a copy from a much more resistant copy through electroplating. The results and many more printing methods are included among the examples in this 1853 volume.

The British printer Henry Bradbury made extensive use of the Auer method in several publishing ventures. Ferns and seaweeds were well chosen subjects for this reproduction method and the reproductions of these delicate specimens closely resemble the originals with their freshest colors permanently intact. The original octavo editions of The Nature-printed British Ferns and The Nature-Printed British Sea-Weeds can be consulted by patrons of the Free Library of Philadelphia and they are best experienced in person.

Lepidochromy is the name sometimes used for a form of nature printing that involves the transfer of moth and butterfly wing scales directly to a prepared paper. The most ambitious work to include direct wing transfers was published in 1900 Boston: As nature shows them; moths and butterflies of the United States. Sherman Foote Denton's work on the moths and butterflies of the United States was issued in an edition limited to 500 and the Free Library holds two complete sets of this landmark work.

The Auer and Henry Bradbury printed volumes, as well as Denton's books, are the subject of a book talk and display presented by the Art Department: Art of the Nature-Printed Book on November 30, 5:30 p.m.-7:00 p.m. in Room 108 of the Parkway Central Library. 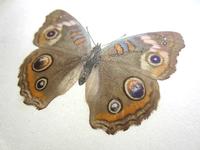 Butterfly transfer in Sherman Foote Denton's As Nature Shows Them, 1900 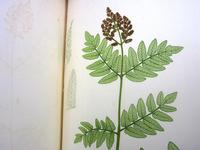 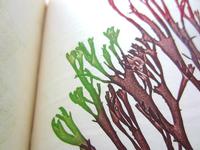 Nature print by Henry Bradbury from The Nature-printed British Sea-weeds, 1859
Add a Comment