Ferdinand: The Bull Is In The House (or at least the library!)

Ferdinand never wanted to be a fighting bull, so he's right at home here in the Free Library...

John Cena stars as the big-hearted bull in the animated adaptation opening in theaters today, but did you know the film is based on The Story of Ferdinand, a children's book that just celebrated its 80th birthday last year? Written by Munro Leaf and illustrated by Robert Lawson, it was an immediate hit, and is still widely read today. Here in the Rare Book Department, we have the best collection of Robert Lawson's original artwork and illustrations in the world (and Munro Leaf's papers too!) so we're big fans of "The Story of Ferdinand." Looks like the animators were good students, check out a few side-by-side comparisons from the movie and Robert Lawson's hand-drawn "dummy book" that he and Munro Leaf used to entice publishers.

At home, Ferdinand loves to sit under his cork tree and smell the flowers.

He is a gentle bull who has no interest in fighting, at least until he accidentally sits on a bee.

In the enormous bullring, Ferdinand would rather sit than fight.

The movie, set in present-day Spain, involves more sassy hedgehog sidekicks than the picture book we know and love here in the Rare Book Department, but we're excited to see Ferdinand make his way into the hearts of new families nonetheless. 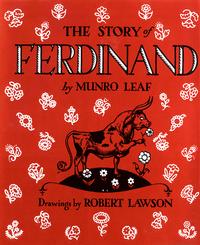 The Story of Ferdinand by Munro Leaf just celebrated its 80th birthday last year and now has an animated adaptation opening in theaters this weekend.
Add a Comment