by One Book, One Philadelphia Chair, Marie Field

Born and raised in the Bronx, then Queens, I landed in Brooklyn when I moved into my new husband’s efficiency apartment on Willow Street in Brooklyn Heights. That single room contained our everything. And if we wanted a spectacular view, we would go to the roof where we gazed upon the soaring Brooklyn Bridge, the Manhattan skyline, and the welcoming Statue of Liberty.

Every weekday morning, I walked down Willow Street to Hicks, where I taught third grade at P.S. 8. I would pause at the corner of Willow and Middagh to look at a shuttered clapboard house, bordered by a picket fence, with a large tree growing nearby. Buds in early spring, summer’s green leaves turning russet in autumn, sculptured bare branches in winter. Hinting of a bygone Brooklyn, the house looked as if it belonged in the country, not an urban neighborhood of brownstones and apartment buildings. If only it could talk, what stories might it tell?

Approaching P.S. 8, I heard children playing in the schoolyard. Boys raced about, shouted and threw balls to each other and against the school walls. Girls swung their legs over bouncing balls, played jacks, hopscotched over chalky squares, or jumped double dutch. While I had never mastered the superfast footwork of double dutch, I would sometimes help turn the ropes for the girls and listen to their chants as they jumped in and out of the crisscrossing ropes slapping against the concrete. "A my name is Alice and my husband’s name is Alan…" Just like August and her friends as they jumped double ropes on the Bushwick pavement in Another Brooklyn.

This was my first time teaching. Each morning, a group of Puerto Rican, Chinese, black, and white children would greet me with bright smiles and high expectations. A sampling of New York’s melting pot. We shared an old-fashioned classroom, with straight rows of wooden desks and attached seats nailed to the floor.  An easel stood in the back and the children took turns painting.  Inspired by their artwork, I sketched them from my desk and later painted them with water colors. I can remember them today when I look at their framed group portrait hanging on my study wall: Angelo, the twins, Mildred and Awilda, Frank, Vivian, David, Maria, Robert Hernandez… my first class. I taught them the pleasures of poetry, especially haiku, cursive writing, math, and the early history of Brooklyn. They taught me about themselves. About myself.

On the way home from school, I often stopped at a small grocery store. One day, the proprietor told me Truman Capote had just left with his two dogs. I rushed out, following the famous author from the other side of the street, until he turned right on Willow Street, towards his brownstone home, and I turned left towards my apartment building. I was thrilled to come that close to the author of Breakfast at Tiffany’s and The Grass Harp.

Every two weeks, when I received my paycheck, I would hike to the Brooklyn Savings Bank and ascend to the neoclassic entry with a great sense of purpose. Two years of paychecks added up and my husband and I used that money to help pay for our new furniture when we migrated to Philadelphia.

Sometimes, when driving through the neighborhood, I would see the words "Watchtower," atop a large yellow building. It was the headquarters of Jehovah’s Witnesses. Now I can mingle that memory with the times Jacqueline Woodson, as told in Brown Girl Dreaming, dressed up on Saturdays and as a Jehovah’s Witness, knocked on doors, saying "we are spreading the good news of something better coming."

On the last day of my second year of teaching at P.S. 8, I started crying when the bell rang throughout the school, signaling the final dismissal time. I continued crying as I led the children down the steps and outside to where their mothers were waiting. It was time to say goodbye.

Brooklyn was the beginning of my marriage. Brooklyn was my first two years of teaching. Brooklyn is all the lovely and funny memories of those early days. And now Another Brooklyn has become part of my Brooklyn. 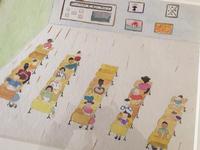