The Free Library's Rare Book Department prides itself on making historical and beatiful artifacts available to the general public. An award of $500,000 from the Council on Library and Information Resources (CLIR), which is made possible by funding from The Andrew W. Mellon Foundation, will make some of its collection more accessible to more viewers than ever, through a project to digitize—and provide free, open access—to  hundreds of Islamic manuscripts and paintings that have previously been largely invisible to scholars.

In partnership with Columbia University, the University of Pennsylvania, Haverford College, and Bryn Mawr College, the Free Library will lead the three-year project Manuscripts of the Muslim World, making a hidden portion of the Islamic manuscript tradition available worldwide. It will provide digital access to a total of 576 Islamic manuscripts and 827 paintings dating from 1000 to 1900. The Free Library's own Caitlin Goodman, curator of the Rare Book Department, is serving as the project's primary investigator.

Representing a great breadth OF the Muslim world’s flourishing intellectual and cultural heritage, the manuscripts, codices, and paintings cover mathematics, astrology, history, law, literature, and religion, as well as copies of the Qur’an and Hadith. The bulk are Arabic and Persian illuminated manuscripts, along with examples of Coptic, Indo-Persian, Samaritan, Syriac, and Turkish calligraphy, and album leaves and paintings. The manuscripts help to document the Islamic Golden Age (8th to 13th centuries), a period when scholars in the Muslim world helped to preserve works of Greek philosophy while advancing science and mathematics; the Early Modern Period, during which the Ottoman Empire rose as a global power; and the beginnings of modernity.

These beautiful treasures of the Muslim world are among the items that will be digitized as part of the project: 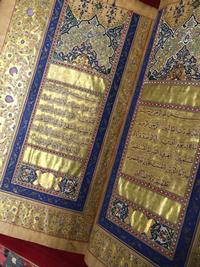 Qur’an
Lewis O 3
This circa 16th-century Qur’an from Iran is one of more than two dozen in the Rare Book Department’s collection of Islamic manuscripts. The opening pages are extensively illuminated in gold, and the beautiful Naskh script is decorated throughout. 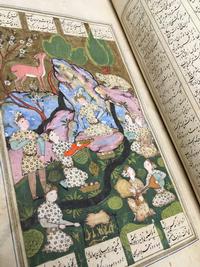 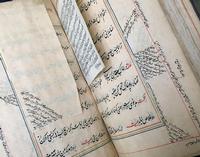 Gulistan of Saadi
Lewis O 71
Saadi was one of the most important medieval Persian poets. This copy of his popular collection the Gulistan is probably from India around 1800 and is filled with commentary from many different readers lining the margins and pasted in on slips of paper.

The digitization and metadata creation of these materials will go hand­-in-­hand with full cataloging of the digital images. The materials will be made available online without restrictions. All digital images and records from the project partners will ultimately be available as a unified collection at OPenn—an open web resource that contains high-resolution archival images of cultural heritage material—and added to other online repositories.

To see these items and more rare books and artifacts, visit the Rare Book Department at the Parkway Central Library. Guided tours of the department and the William McIntire Elkins Library are offered Monday through Saturday starting at 11:00 a.m.—no appointment necessary! 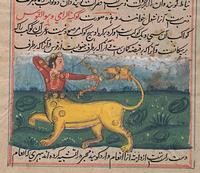 Zodiological detail from Lewis O 41, Marvels of Things Created
4 Comments | Add a Comment
Congratulations!! What a wonderful gift to the World.
Lilian Terreros - Baltimore
Congratulations (Mabrook) and thank you (shukkran) for undertaking this project. Most Americans know little of the great civilizing effect Islam had on Europe from the 8th to 13th centuries. I look forward to visiting soon.
Marshall Linton - Perkasie, PA
Well done! Scholarship collaborations at this level will promote greater understanding and a chance for many to appreciate the artistry of the Muslim World at that point in history.
C C Cornberg - Philadelphia
جزاكم الله خيرا وارجو إفادتى بكل جديد
HUSSEIN METWALLEY - Alexandria