Frankenstein200 at the Rosenbach

On January 1, 1818, the London publishing house Lackington, Hughes, Harding, Mavor, & Jones published a book titled Frankenstein, or The Modern Prometheus. The publication did not name its author, but the book had a preface written by Percy Bysshe Shelley and a dedication to writer and philosopher William Godwin, so some readers assumed that the novel was authored by one of these men.

Eventually, the book’s popularity (bolstered by a theatrical adaptation titled Presumption; or, the Fate of Frankenstein) occasioned a second edition, this time with the author’s name on the title page: Mary Shelley.

Since its early anonymous publication, Frankenstein has been subject to a variety of opinions, from high praise to criticism to skepticism—but two hundred years later, no one can deny the impact this work of science fiction has had on literature, culture, and even science fact. Dr. Frankenstein exemplified the image of the mad scientist whose commitment to discovery eclipses his humanity and becomes his downfall—a character concept that has been recreated to both tragic and comic effect in numerous adaptations. Dr. Frankenstein’s creature, much more powerful than the sum of his sewn-together parts, inspires contemporary criticism of the frightening amalgamations of our present (such as Frankenfoods and Frankenstorms). And as this daunting list of adaptations of Frankenstein on page and screen illustrates, there is something about this novel that still captures our imaginations.

The Rosenbach has been celebrating this momentous publication anniversary since October, when we opened our exhibition Frankenstein & Dracula: Gothic Monsters, Modern Science. But this month, we join centers of literature, learning, and science around the world to honor Mary Shelley’s groundbreaking first novel and the influence it continues to have today. Until the Frankenstein & Dracula exhibition closes on February 11, you can view eleven pages of Mary Shelley’s Frankenstein manuscript at the Rosenbach—the first and one of the only U.S. institutions to claim this honor. Make sure you see them before they return to the Bodleian Libraries.

While the exhibition will guide you through the story of the novel’s origins and Mary Shelley’s scientific explanations, there are many opportunities this month to read deeper and share this experience with other bibliophiles and gothic horror aficionados

Of course, a devoted reader’s exploration of Frankenstein need not stop there. Thanks to major support from the B. H. Breslauer Foundation and generous gifts from Mark Samuels Lasner and Clarence Wolf, the Rosenbach collection includes rare first editions of many of Mary Shelley’s novels, from her first (Frankenstein) to her last (The Last Man); when the exhibition closes, these beautiful volumes may be viewed by appointment and perhaps in future programming. In addition, our partners in celebrating Frankenstein‘s bicentennial have released an interactive story experience based on the novel: Frankenstein200, brought to you by support from the National Science Foundation and the collaborative work of many national partners. This cutting-edge digital experience can be enjoyed by children and adults alike. We hope you enjoy it—and keep an eye out for our own contribution, drawn from our digital interactive in Frankenstein & Dracula. 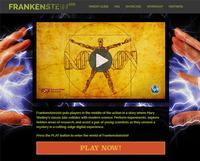 Screenshot of the Frankenstein200 digital interactive
Add a Comment