The Literary Birthday Party That Wasn’t

Let’s set the stage: It’s the mid-1920s. Paris, maybe. There’s some highbrow literary chit chat, a bit of the usual expat gossip, and plenty (and I mean plenty) of champagne. And lighting up the whole shindig are some fireworks—verbal, of course—courtesy of the honorees: Ernest Hemingway and Zelda Fitzgerald.

Okay, so this birthday bash didn’t really happen, but part of me wishes it had. Though their birthdays are separated by just 48 hours (he was born on July 21, 1899, she one year later on July 24), these two Lost Generation luminaries couldn’t have been more different—or less inclined to get along.

They met in 1925 after Scott and Zelda Fitzgerald debarked in Paris and went out in search of Hemingway, already a literary man-about-town in the City of Lights. The mutual dislike was nearly instantaneous.

Hemingway had no problem telling Scott that he thought Zelda was “crazy.” To read his letters is to be pummeled again and again with his belief that Zelda was out to sabotage her husband because she was jealous of his creative talents. In one classic for-instance, Hemingway writes to editor Maxwell Perkins: “Instead of thinking Zelda a possible good influence (what a phrase) for Scott, I think 90% of all the trouble he has comes from her.” In another, he notes to Arthur Mizener that Zelda was “constantly making him [Scott] drink because she was jealous of his working well.” Yikes.

And for her part, Zelda had no time for Ernest’s overblown masculine persona. She thought he was a big, posturing phony, referring to him as “a professional he-man” and “bogus.” Her antipathy towards him was so strong it warrants its own entry in the index to Nancy Milford’s Zelda, where readers will find “Hemingway - Zelda’s dislike of” with a smattering of page numbers following it. On one of those pages sits the story of when an acquaintance asked Zelda what Hemingway’s The Sun Also Rises was about: “Bullfighting, bullslinging, and bullsh—“ she started to answer until Scott cut her off.

While they were said to be relatively restrained when actually in one another’s company, letters, interviews, and documents from the period give today’s readers a glimpse into how deeply these two July babies’ personalities clashed.

So thanks for keeping things interesting—Here’s to you, Z and E! Happy birthday!

To read more about Zelda and Ernest, their rivalry, and other Lost Generation hijinks, check out Ernest Hemingway: Selected Letters 1917-1961 edited by Carlos Baker; Zelda by Nancy Milford; Hemingway’s own A Moveable Feast; and the sprawling, five-volume Hemingway biography series by Michael Reynolds. 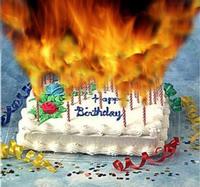 Where there's smoke, there's fire—especially if Zelda Fitzgerald and Ernest Heningway are having a (imagined) shared birthday party.

These two Lost Generation luminaries couldn’t have been more different—or less inclined to get along.
1 Comment | Add a Comment
Funny, with a very interesting theme--July babies ! You can also read about Dunc Chaplin in A MOVEABLE FEAST. He knew Fitzgerald from Princeton, where he was a baseball star, and they both met Hemingway in Paris on the same day. Forty years later Chaplin was a retired businessman in Maine when his children were startled to read about him in LIFE magazine which had serialized Hemingway's great Paris memoir. I think Dunc finished up a lot happier than the rest of the gang. I wonder if he was a July baby ?
Larry Dugan - Philadelphia