With an estimated 62 million Spanish speakers residing in the US, the United States now has the second largest Spanish-speaking population in the world after Mexico. But for many bilingual Americans, their preferred everyday tongue is "Spanglish", a comfortable mix of Spanish and English that's spoken with friends, family, and members of their community.

But what, really, is Spanglish? The term "Espanglish" was coined by Puerto Rican poet Salvador Tió, but not as a compliment: he lamented how the American influence had supplanted pure Spanish on his island where, nowadays, the widespread use of Spanglish extends even to the graffiti. It should be noted that Spanglish is not a monolithic entity. Depending on who’s speaking it and why, it can resemble:

Regardless of how they speak it, Spanglish is a point of pride among many Hispanics and Latinx, who celebrate how it reflects and honors their everyday speech patterns, who proudly rename themselves "Nuyorican" and their Manhattan neighborhood Loisaida (from the English "Lower East Side"),  eat "cornflei" for breakfast, "googlear" things on la Internet, and seamlessly understand the DJs at KXOL-FM Los Angeles, a partying reggaeton radio station famous for broadcasting in Spanglish. (No la touch that dial!)

And Spanglish is an exciting new territory for a new generation of writers exploring their identity as Hispanic- and Latinx-Americans. The University of Iowa offers a Spanish-language writing MFA, and the University of Texas at El Paso offers the only bilingual MFA in the world. Poets like Anacristina Chapa are even publishing their Spanglish poems on YouTube...

Giannina Braschi's novel Yo-Yo Boing is the first novel written in Spanglish, and our Parkway Central Library’s Teen Center has Cool Salsa: Bilingual Poems on Growing Up Latino in the United States, with poems like "Why Do Men wear Earrings On One Ear?" by Trinidad Sánchez, Jr.

Sepa yo!
Maybe por costumbre, maybe porque es la moda
or they have made promesas, maybe for some vieja
for cosmetics or because some women love it
because they were on sale
because they are egocentric cabrones y buscan la atención
because la chica selling them was sooooo mamacita
and they could not refuse

Welcome, muchachas from Teocaltiche, in this class
we speak English refrito, English con sal y limón,
English thic as mango juice, English poured from
a clay jug, English tuned like a requinto from Uruapán,
Elglish lighted by Oaxacan dawns, English spiked
with mescal from Juchitán, English with a red cactus
flower blooming in its heart.

Bato Loco! Take off that handkerchief
from around your head,
and wipe away la sangre
of a thousand years of bloodshed
y miseria
draped in an idolatrous symbol
at a time when sus carnales
estaban cantando sweet melodies
into las rucas
about dreams that have yet
to come true. 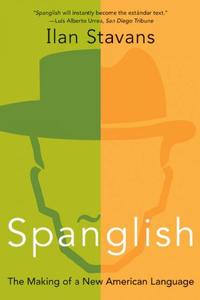 Spanglish: The Making of a New American Language by Ilan Stavans
Cool Salsa: Bilingual Poems on Growing Up Latino in the United States
Add a Comment