According to the American Library Association’s Office for Intellectual Freedom, at least 46 of the Radcliffe Publishing Course Top 100 Novels of the 20th Century have been the target of ban attempts.

For those incredulous at this 46% statistic, let’s pull out some of those 100 classic titles. The following 10 works have been not only censored, but literally burned:

Here’s to books, words, and the freedom to read widely and often!

And to libraries, especially contemporary public libraries that provide access to books—for free—to everyone.

A conflagration is a large and destructive fire that threatens human life, animal life, health, and/or property. It may also be described as a blaze or simply a fire. A conflagration can begin accidentally, be naturally caused, or intentionally created. 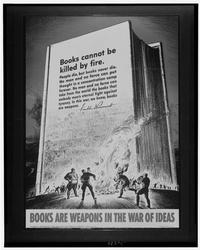 The following 10 works have been not only censored, but literally burned.
Add a Comment