Many subjects can cause the challenge or ban of a book, especially a book intended for children. Most challenged and banned book instances occur in school libraries and are brought forth from parents.

Books are here to teach and entertain. The best ones accomplish both.

When attempting to teach children something through a book, the author must approach it in a different way than if the audience were adults. This task becomes even more difficult when the subject is "taboo," "different," or "unconventional." Many challenged books share common themes, such as witchcraft, religion, sex, and LGBTQI+ themes. Most feel that the subjects are too mature for the intended audience, and this is reflected in the amount of picture books that are frequently challenged or banned.

In this post, we will focus on the theme of LGTBQI+ in picture books.

Some picture books are more subtle in their messages and some are not! In The Sissy Duckling, written by Harvey Fierstein and illustrated by Henry Cole, the word "sissy" is frequently used as an insult to those who identify as male but present, in actions and/or dress, as female. This book shows how children are taught to act from a young age all dependent upon the sexual organs with which they are born. This is, fortunately, something that many parents are shying away from more recently. It is becoming more accepted for a male child to play with dolls and wear pink, and a female child to play with trucks and wear blue. The Sissy Duckling teaches children that no matter how you identify you can be yourself without being put into societies’ boxes. 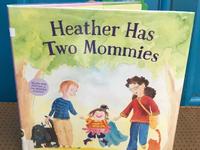 Another frequent theme in LGBTQI+ picture books is "unconventional families." It all started with Heather Has Two Mommies written by Lesléa Newman and illustrated by Laura Cornell (this book was republished in 2015). Children not only need to learn about those different from them but they need to see themselves reflected in books they read. Having a picture book where the child has two mommies is a huge deal for a child who lives that every day. They need to see others living that same life; it validates them and their families. More picture books featuring same-sex couples are published every year. In 2010 and 2011, respectively, Vanita Oelschlager published A Tale of Two Daddies and A Tale of Two Mommies. With these picture books, our youngest patrons learn about families who may or may not look like theirs. 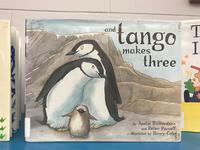 Many who challenge and ban these picture books do so because they interfere with their religious beliefs and their beliefs that one’s sexuality is a choice. For this reason, one of the most frequently challenged and banned picture books is And Tango Makes Three, written by Justin Richardson and Peter Parnell; illustrated by Henry Cole. In this true story, two male penguins fall in love and raise a baby penguin chick together. It may be easy for one to argue that a human’s sexuality is a choice but how does one argue with penguins? This picture book shows that same-sex love happens in all of nature.

At the Free Library of Philadelphia we support everyone’s right to read! We advocate for early literacy and family literacy. We encourage parents and children to discuss books and topics together. If you would like to learn more about Banned Books Week, frequently challenged and banned books, and your freedom to read, please check out the American Library Association. Please also visit your local library and ask your librarian for recommendations of more frequently challenged and banned books!

LGBTQI+ themed books, especially for children, are some of the most challenged and banned books.
Add a Comment