The Parkway 100 celebration of the Benjamin Franklin Parkway drew to its official close with the Parkway Soirée this past Friday night, October 26—100 years to-the-day after the full length of the Parkway opened to traffic. It was the vision of architect and urban-planner Jacques Gréber (1882–1962) and the support of visionary civic-leaders and citizens that gave shape to and made a reality of a desire first proposed in 1892. This wish? A defining grand boulevard lined with gardens, public art,  and "beautiful and useful" landmark buildings embodying our highest shared civic values and providing the space and resources required for one and all to live them and pursue our most profound individual and collective aspirations.

The Parkway 100 centennial salute may be over but, fortunately, the Parkway not only remains, but—thanks to thoughtful and rigorous analysis, reimagining, and renovations completed and in-progress—is experiencing a renaissance inspired by a collective desire to enhance and enrich the lives of Philadelphians and provide a breathtaking setting for visitors from across the region, country, and world to have unforgettable experiences. The Parkway Museums District—of which the Parkway Central Library is a cornerstone and center of activity—is growing, evolving, and thriving!

Is the Ben Franklin Parkway the Champs-Élysées of Philadelphia, or has it turned the table on Paris’s "Elysian Fields"? Dating to 1670, the Champs-Élysées has the bragging-rights of the first-born. But there’s no questioning the symbolic, physical, and practical importance as well as the international profile of the grand boulevard named (in 1937—it debuted as the Fairmount Parkway) for Philadelphia’s impish, ingenious, and inspiring hometown hero and secular patron saint. "The Parkway" is where Philadelphians gather to be wowed by fireworks celebrating Independence Day and usher in the New Year, parade to express pride in diverse identities, dance and sing along to performances by musical luminaries, protest in the cause of improving society, and cheer athletic achievement with region-wide team spirit.

The Parkway is Philadelphia’s "Corridor of Culture"—the expressions and creations of humanity—and a place that promotes engagement with nature by serving as a passage between the tightly packed, skyscraping urban-grid of Center City with its bustling traffic on foot and on wheels and the open, rolling, green expanses of Fairmount Park flanking the broad and gleaming vistas of the Schuylkill. It’s a work of environmental art and place of natural beauty viewed daily by hundreds of thousands of commuters on Kelly Drive, bicyclists and recreational walkers on the Schuylkill River Trail, hikers and picnickers, and rowers skimming the river’s surface with gliding grace that belies the required exertion.

In sum, the Benjamin Franklin Parkway at 101 is not only maintaining its historical planners’ dreams for a mecca brimming with treasures ready to meet and spark the dreams of Philadelphians while presenting a boldly beautiful face to eyes gazing at Philadelphia from points near and far. The Parkway is so much a part of Philadelphia’s "built environment" and the lives of its people that we may forget it wasn’t always at the heart of our beloved hometown. In truth, though, the Benjamin Franklin Parkway is a testament to the good work and civic ambitions of 19th-, 20th-, and 21st-century Philadelphians.

The Free Library of Philadelphia, chartered in 1891 (one year before the Parkway was first proposed) as "a general library which shall be free to all," is—like the Parkway and as a critical component of the Parkway—passionately committed to nurturing cultural and civic engagement, good work, and greatest ambitions of everyone who calls Philadelphia home.

The Parkway lit up at night 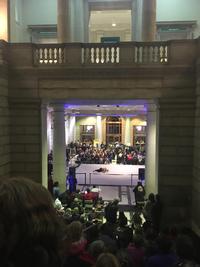 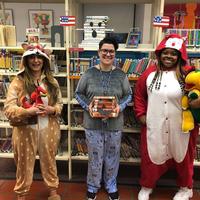