At These Crossroads: The Legacies of Frederick Douglass and W.E.B. Du Bois Exhibition

Update: The Free Library’s At These Crossroads exhibition was honored as an Adobe Government Creativity Awards finalist in the ‘Multichannel Campaign – Museum of Park Exhibit’ category! Come see this exhibition at the Parkway Central Library before it closes this fall!

Born in 1868, just shortly after the Union’s triumph in the Civil War and the emancipation of enslaved African Americans, William Edward Burghardt (W. E. B.) Du Bois died in 1963, just one year before Congress passed the Civil Rights Act, which—in law if not practice—ended discrimination based on race, color, religion, sex, or national origin.

To illustrate the changing realities of Douglass and Du Bois’s lives and their continued relevance, exhibition curator Dr. Judith Giesberg—professor of history at Villanova University—points to The Horizon, the "Journal of The Color Line", written and edited in part by Du Bois from 1907 to 1910. The Horizon focused on press coverage relating to African Americans, often decrying racism in the "mainstream" (i.e., white) media and accommodation and appeasement in black-owned periodicals.

In a July 1908 editorial, Du Bois argued that "the policy of the Democratic Party is the best policy for the Negro" and urged African Americans to end their historic allegiance to the Republican Party. Although once the party of Abraham Lincoln, emancipation, and Douglass, Giesberg notes, "In 1908, the Republican Party was the party of white supremacy. Du Bois insisted that African Americans owe their allegiance to no party and, instead, should cast their vote for candidates who deliver on promises of black economic prosperity and political equality."

"Our goal with At These Crossroads, as with all the Free Library’s exhibitions, is to use our collections to inspire civic dialogue," explains Andrew Nurkin, the Free Library’s Deputy Director for Enrichment and Civic Engagement. "The Horizon—which can be found in a rare full run at the Free Library—helps us understand the context of 1908 and challenges us to consider voter disenfranchisement, racial inequality, and economic disparity in 2018."

The Horizon is not the only historical document with images and text appearing in At These Crossroads. Drawn from the collections of the Free Library of Philadelphia, the Historical Society of Pennsylvania, the Library Company of Philadelphia, and Temple University Libraries, this exhibition also includes images and documents from archival institutions around the country.

Throughout the exhibition, viewers will be prompted to consider how the work of Frederick Douglass and W.E.B. Du Bois connects with today’s urgent issues. To underscore these ideas, a series of programs will take place in 2019, discussing the complicated legacy of the 13th Amendment, black women activists of Douglass’s and Du Bois’s eras, and black resistance to violence, as well as other timely topics.

Along with Dr. Giesberg, the exhibition was curated by Kalela Williams, Director of Neighborhood Library Enrichment Programming, who brings a personal perspective to what Du Bois described as "double-consciousness"—African Americans’ constant awareness of being, simultaneously, black and American. "At These Crossroads is as much about being black in the 21st century as the 19th or 20th," Williams observes. "It’s about the confluence of blackness and patriotism. For me, it’s what it means to celebrate both African heritage and American citizenship."

Read more about Frederick Douglass and W.E.B. Du Bois, and on January 9, join us for In Conversation with The Rosenbach Mini-Series: The Legacy of the Thirteenth Amendment, a talk by award-winning journalist Michele Norris, which will be followed by a special, curator-led Tour of At These Crossroads: The Legacies of Frederick Douglass and W.E.B. Du Bois.Visit rosenbach.org to purchase tickets for the conversation. 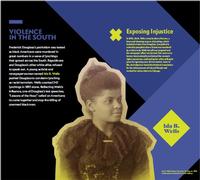 While At These Crossroads focuses on Frederick Douglass and W.E.B. Du Bois, it also features other activists of these men’s times, such as journalist Ida B. Wells, who used the press to both expose and resist violence against African Americans.
3 Comments | Add a Comment
Very timely and kudos! I hope that there is discourse around how complex and perhaps conflicted Douglass was being married to a White woman and how he was allowed to live in his marriage. Few exhibits discuss this in detail. He was so far ahead of his time in so many ways regarding Humanity. Thank you.
Dr Alicia Bullock - Philadelphia
I'm so happy and proud to see exhibits like this at our library. Thank you!
Jamie Bowers - Philadelphia
I really appreciate this exhibition. This is such a rich history. I will continue to study it.
Kim Smallwood