It's that time of year again where everything seems to slow down between the holidaze and my mind and free time turns to my never-ending "to-watch" list. There's few greater joys than turning off all my electronic devices, turning the lights down, screening a movie and just being totally engrossed in another world for a couple of hours.

Lucky for all of us that every year—for the past 30 years—the National Film Registry has been adding and recommending films to watch including award-winners, cinema classics, documentaries, b-movies, book-to-screen adaptations, and many more!

You can browse and check out the majority of this year's selected films from our catalog, available in DVD, Blu-ray, and Streaming Video formats, while others can be found in the public domain or viewable via video-sharing websites like YouTube. There's also currently over 330 diverse films and videos available online for free viewing through the Library of Congress National Screening Room.

This year's selections bring the number of films in the registry to 750!

Bad Day at Black Rock (1955, DVD and Blu-ray)
A one-handed stranger comes to a tiny western town possessing a terrible past that the townspeople want to keep secret. Fists fly and mystery abounds in this Spencer Tracy-starring drama.

Broadcast News (1987, DVD)
In this romamntic dramedy, a love triangle takes place amongst the backdrop of 80s network news.

Brokeback Mountain (2005, DVD)
Jake Gyllenhaal and Heath Ledger play two cowboys who have a secret love affair over many years.

Cinderella (1950, DVD and Blu-ray)
Classic fairy tale given the Disney animated treatment and ranked the 9th greatest animated film of all time.

Days of Wine and Roses (1962, DVD)
A harrowing tale of an ad executive and his wife whose social drinking spirals out of control. Their lives and marriage degenerate as their alcoholism progresses.

Dixon-Wanamaker Expedition to Crow Agency (1908, YouTube)
This silent-film footage is the only known surviving film from the 1908 Rodman Wanamaker-sponsored expedition to record American Indian life in the west. Filmed by Joseph K. Dixon and his son, Roland, the film captures rare glimpses of life on Crow Agency, Crow Fair, and a recreation of the Battle of Little Bighorn featuring four of Custer's Crow Scouts.

Eve’s Bayou (1997, DVD)
Eve's family seems perfect until she catches her doctor father more than just examining one of his patients and Eve's tormented by the family secrets that come out.

The Girl Without a Soul (1917, IMDb)
The story of two young sisters, one a somewhat demure musician who is in love with a scoundrel who's no good for her, and the other a wild, free spirit who is the object of a shy young carpenter's affections.

Hair Piece: A Film for Nappy-Headed People (1984, IMDb)
An animated satire that questions the self-image of African American women living in a society where beautiful hair is viewed as hair that blows in the wind and lets you be free.

The Informer (1935, DVD)
John Ford-directed crime drama set in 1920s Dublin, where a drunk tortured soul must confront the fact he betrayed his friend to the police for for a paltry sum.

The Lady From Shanghai (1947, DVD)
Orson Welles directs and stars in this film noir that takes place on a bizarre yachting cruise.

Leave Her to Heaven (1945, DVD)
A film noir, shot in broad daylight instead of the shadows, that centers on a writer who falls in love with a young socialite but is soon consumed by obsession.

Monterey Pop (1968, DVD and Blu-ray)
The first rock festival docmuented on film and released as a feature. The Monterey Pop Festival, held on California's Monterey Peninsula in 1967, helped launch the careers of Jimi Hendrix, Janis Joplin, and Otis Redding, as well as featuring the infamous footage of The Who's Pete Townshend destroying his guitar and Jimi Hendrix setting his guitar in flames on stage.

My Fair Lady (1964, DVD and Blu-ray)
The classic film adaptation of the Broadway stage hit. Audry Hepburn plays sassy, working class London girl Eliza, who is turned into a sophisticated lady of high society by a professor who takes a wager. As in most cases like this—hijinx ensue.

On the Town (1949, DVD)
Gene Kelly and Frank Sinatra star in this comedic musical about three sailors on a day of shore leave in New York City looking for fun and romance before their twenty-four hours are up. Features the famous song and dance number "New York, New York".

One-Eyed Jacks (1961, DVD)
Marlon Brando stars as Rio, a bank robber who is bent on revenge against his one-time partner in crime.

Pickup on South Street (1953, DVD)
Director and writer Samuel Fuller's crime-noir-thriller about a petty crook who pickpockets more than he bargained for when he obtains a strip of microfilm bearing confidential U.S. secrets.

Rebecca (1940, DVD)
Hitchcock suspense thriller about a self-conscious bride who is tormented by the memory of her husband's dead first wife.

The Shining (1980, DVD and Blu-ray)
Stanley Kubrick’s visually stunning adaptation of Stephen King's novel of one man's madness, a psychic child, and the ghostley goings of the Overlook Hotel.

Something Good – Negro Kiss (1898, YouTube)
Film archivists at USC found and restored what they now think is the oldest film ever of African-American love and affection all the way from 1898.

How many of this year's selected films have you seen? Which films do you think should be included in next year's selections? Let us know in the comments! 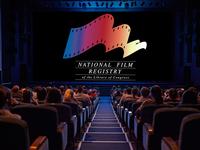 For the past 30 years, The National Film Registry has selected 25 films each year showcasing the range and diversity of American film heritage to increase awareness for its preservation. 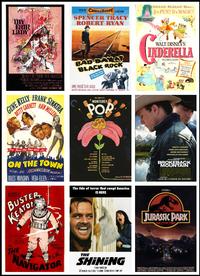