The newest batch of must-read titles for children and young adults has been chosen once again to receive the Youth Media Awards!

The American Library Association's yearly event, held this year in Seattle, WA, is often called "The Oscars for Children's Literature."

We at the Free Library of Philadelphia are especially excited and proud that one of our staff members, Young Adult Material Selector, Rachel Fryd, served as Chair for the Printz Award Committee this year! The Michael L. Printz Award, given to the book that "exemplifies literary excellence in young adult literature," was awarded this year to The Poet X by Elizabeth Acevedo. "It’s that rare combination of kick-ass literary novel and resonant, readable story," said Fryd.

This year also introduced a new award: The Excellence in Early Learning Digital Media Award, given to a digital media producer that has created distinguished content for an early learning
audience. The Play and Learn Science app, produced by PBS Kids, took home the inaugural prize.

You can browse, place holds, and check out all of these award-winning books from our catalog—from the Caldecott Award and Theodor Seuss Geisel Award to the Pura Belpré Award, Stonewall Book Award, and Coretta Scott King Award, to name just a few! 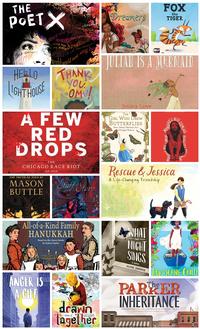 Just some of these year's Youth Media Award Winners available in our catalog.