Don’t Be a Drag, Just Be a Queen: Exploring and Celebrating Gender Roleplay in Young Adult Books!

Welcome to another Pride Month, friends! After this season of RuPaul’s Drag Race, I’m sure we're all ready to keep the amazing times rolling with more exploration of performative gender with some rollicking young adult novels. Or is that just me? Okay fine, just me. Either way, take off your wig and make up and settle in for some of my favorite titles! 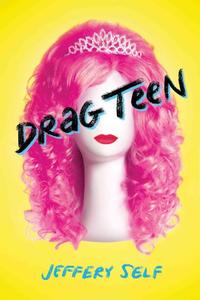 Drag Teen by Jeffrey Self
JT is a gay high school senior determined to get out of Clearwater, Florida, and be the first person in his family to go to college. Even though he cannot figure out how to pay for it, until his friends convince him to compete in a drag teen competition where the first prize is a college scholarship. Guest appearances by an over the top 1970s country and western star, a kindly drag queen who teaches our hero about contouring, and a classic nemesis in the form of another teen drag queen. A clever and heart-filled Wizard of Oz-style journey! 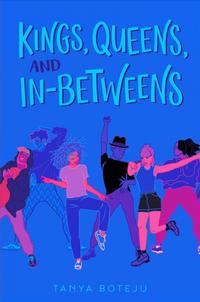 Kings, Queens and In-Betweens by Tanya Boteju
After a bewildering encounter at her small town's annual summer festival, seventeen-year-old biracial queer Nima plunges into the world of drag, where she has the chance to explore questions of identity, acceptance, self-expression, and love. Finding stories about drag queens is easy – drag kings are harder to come by, but no less fun! 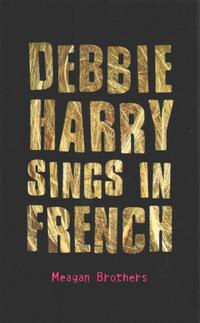 Debbie Harry Sings in French by Meagan Brothers
Johnny's had kind of a tough life so far, and he's always been a bit of a freak. His goth look usually includes black nail polish and a little mascara.When he discovers Debbie Harry, the lead singer of Blondie, he not only likes her music but realizes that he kind of, sort of, wants to BE her. He'd like to be cool and tough and beautiful like her. He'd like to dress like her. He's not gay, at least he doesn't think so. So what does it mean? And what should he tell his amazing new girlfriend? This wise, hip novel introduces shades of gray into the black-and-white ideas of sexuality and gender. Anyone who has ever wished they could be a little bit tough and a little bit glamorous will recognize themselves in Johnny. 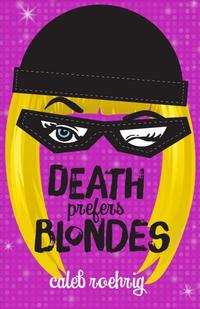 Death Prefers Blondes by Caleb Roehrig
Teen celebrity socialite Margo leads a double life as a cat burglar with a crew of four kickboxing drag queens. When a big job goes belly-up, each one of them must rely on their special skills to survive the night. Very literally RuPaul’s Drag Race meets Paris Hilton meets Ocean’s Eleven, but with better wardrobes and much higher heels. 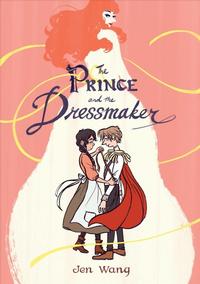 Prince and the Dressmaker by Jen Wang
Prince Sebastian is looking for a bride—or rather, his parents are looking for one for him. Sebastian is too busy hiding his secret life from everyone. At night he puts on daring dresses and takes Paris by storm as the fabulous Lady Crystallia, the hottest fashion icon in the world capital of fashion! A story full of exploration of friendship, fashion, and France!

Can’t get enough Drag Kings and Queens? The Free Library of Philadelphia is hosting many upcoming Drag Queen Story Times to celebrate diversity, acceptance, pride, and being true to yourself. Check our Event Calendar for upcoming dates and times! Want even more? The brand new Field Teen Center is hosting an all-ages drag show on Wednesday, June 26!

Did I miss your favorite king or queen? Let me know in the comments! 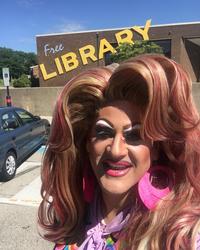 Brittany Lynn getting ready for another draqg queen storytime at one of our neighborhood libraries!
9 Comments | Add a Comment
My friend's book, NEITHER, is an awesome accompaniment to any story hour-but has been featured on Drag Queen Story Hour: https://www.nytimes.com/2019/06/06/us/drag-queen-story-hour.html. She's a local author in New Jersey, if you want to include her in the future.
Barbara DiLorenzo - New Jersey
this event is not suitable for children or anyone else
sharon - phila
<3 <3 <3
KT - Philadelphia
Hi Sharon, Thank you for writing to voice your concern about upcoming Free Library programs. The purpose of drag storytimes is to promote literacy while celebrating diversity, self-expression, acceptance, and imagination. Drag storytimes at the Free Library are not explicit in nature. The storytellers who read during these programs are trained by our library staff, and every storytime is accompanied by a library professional. The tone and themes of these programs are age-appropriate, uplifting, and welcoming of all kinds of families. It has been our experience--and that of many other libraries across the country--that children and parents who attend drag storytimes do not find them confusing or frightening, but rather joyful, fun, and engaging. The Free Library of Philadelphia hosts more than 25,000 programs each year, of which drag storytimes are a small fraction. While all families are welcome at these programs, we recognize that parents and caregivers will decide which of the Free Library's many programs best meet their children's literacy needs.
Web Admin - Philadelphia
The overwhelming majority of people in the US think this sort of material is not appropriate for children and are deeply unhappy about the schools and libraries they entrusted their children to forcing it down their throats. Polls and studies back this up, it's a fact. There is only a very small and vocal super-minority that keeps pushing this agenda... and yes, it is very obviously an "agenda" even though that word is often associated with bizarre conspiracy theorists... the people constantly pushing this material are quite open about doing it because they want to try to change peoples views. That is the definition of an "agenda". When you work for a library, its not your job to push your opinions. Please remember that. You may not like the opinions of the majority of Philadelphians, but its not your place to try to change them. Try to remember that not everyone who disagrees with you is simply "stupid" or "bigoted", but may very well have highly nuanced and well thought out reasons for their positions. This material is offensive to me... not because of what it is, but even more than that, because of what it means about society. It represents a very small group of self-described "intellectuals" who think they know what is best for the rest of the population. This is intellectual fascism. Also remember that trans people are only around 0.4% of the US population. You'd never know that from the disproportionate amount of press and attention they receive.
Vito - Philadelphia
I forgot to add: Since college, I've donated to the Philadelphia Free Library once a year, in April of every year. I love the Free Library, I go to Author Events quite often, and love all the services that the library provides... but because of the trend toward this sort of identity politics, 2019 will be the last year I donate to the Free Library. I hope things change... but I really don't think they will. This makes me sad.
Vito - Philadelphia
Hi Vito, The Free Library holds tens of thousands of programs annually for Philadelphians to engage with, and we understand that customers will make the decision about what programs best suit their needs.
Web Admin - Philadelphia
"The Free Library holds tens of thousands of programs annually for Philadelphians to engage with..." And the overwhelming majority of those events are biased in one political direction. I said I go to Author Events often... the thing is... I used to. I can't anymore, because there are no authors of any value offered anymore. Dan Dennett came here several times, I've seen him. Richard Dawkins came, and I've seen him. Bryan Caplan came, and I saw him. But there hasn't been a SINGLE author in the past year or more that isn't a vocal hard left ideologue. This is unfortunate. You may think you're doing the right thing morally or politically... but you're actually cutting yourself off from the real people in the city of Philadelphia. As I said, there is a very small and vocal group of people who will support you... but the overwhelming majority of the city will not... this will be reflected in your financial statements in the years to come.
Vito - Philadelphia
As a queer Philadelphian and FPL library user/supporter, I'm grateful to see these programs happening in our community. I wish I'd had the chance for my parents and I to attend LGBTQ programs for kids when I was growing up. It would have changed my life for the better and might have helped normalize queerness in my unaccepting family. Thank you for offering these opportunities to the kids of today. <3
CP - Philadelphia, PA